Mexico's president-elect Andres Manuel Lopez Obrador is leading by example in his country's austerity drive. He said he would accept less than half the salary of his predecessor when he takes office in December. This is part of an austerity drive to get Mexico's economy back on track. Mr Obrador told reporters on Sunday that: "What we want is for the budget to reach everybody." This means he will take home a salary of around $5,700 a month. This is just 40 per cent of the salary currently earned by incumbent President Enrique Peña Nieto. In addition, the president-elect said no public official would be able to earn more than he will. His supporters greatly welcomed his new austerity measures. 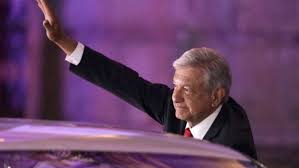 Mr Obrador said he wanted to cut his salary even further to play his part in helping the economy. He stopped at a 60 per cent cut because he thought a bigger cut would reduce the quality of people joining his government. Many are leaving well-paid positions in the private sector to take up ministerial posts that have a low salary ceiling. However, he said he would stand firm on his campaign promise to rein in perks given to high-level government officials. He said there would be cutbacks on chauffeurs, bodyguards and health insurance for ministers. Other measures he will introduce are to turn the official presidential residence into a cultural center and to stop pension payments to former presidents.

The austerity measures will have little immediate adverse effect on the average Moroccan
财政紧缩政策不会对普通的摩洛哥人产生直接的负面影响62,ZRo@1&S。

2.He said there would be cutbacks on chauffeurs, bodyguards and health insurance for ministers.

The region has also been hit hard by cutbacks in defence spending, which has left thousands out of work.
该地区也深受造成数千人失业的国防开支缩减的打击1!n)L1KrDQ[6|。