Last year was the worst year on record for the number of people who became refugees. The United Nations (U.N.) said that in 2015, over 65.3 million people were forced to leave their home or country. This is an increase of over five million from 59.5 million over the previous year. The 2015 figure is a 50 per cent increase from five years ago. It also means that one in every 113 people on the planet is now a refugee, an asylum seeker or someone displaced in their own country. The U.N. reported that: "Twenty-four people are displaced every minute." It added that two-thirds of the forcibly displaced are refugees in their own country. The figures come from the "Global Trends" report marking World Refugee Day on June the 20th. 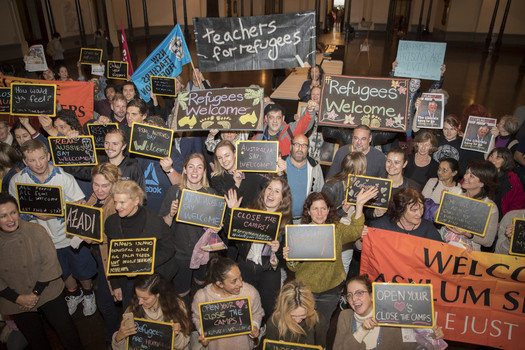 The U.N. said the biggest reason for the record number of refugees in 2015 is war. Fighting in Syria, Afghanistan, Burundi and South Sudan has created the largest number of refugees. Half of them are children. The U.N. said more than 98,000 asylum requests in 2015 were made by unaccompanied children. This is the highest number ever seen. The U.N. added that: "Ninety percent of the forcibly displaced are from poor or middle income countries." Many of them are escaping from wars only to face big problems at borders. These include walls and fences in Europe, tougher laws against immigration and xenophobia. The U.N. said the only way to overcome the problem is, "political action to stop conflicts".

例句：He was charged with abducting a taxi driver and forcing him to drive a bomb to Downing Street.
他被控劫持一名出租车司机并强迫他开车把一颗炸弹送到唐宁街uGPl2UUK|mD.S&。

例句：He told us the story of his escape from the enemy.
他向我们叙说了他逃离敌人的经过cf[4E(F.&b2JqZrlh。

例句：The practice is to keep on record any analysis of samples.
习惯上要把所有的样品分析记录在案.#aLuMDStyZ2OQDH。

6) What is the biggest reason for the record number of refugees?
a) religion
b) idiotic leaders
c) famine
d) war

9) Where do refugees face problems after they escape from wars?
a) in immigration centres
b) on trains
c) at borders
d) in camps

10) What did the UN say was the only way to get over the problem?
a) hold talks
b) political action
c) more armies
d) money