A 72-year-old woman from Amritsar, India is celebrating the birth of her first child. Daljinder Kaur and her husband Mohinder Singh Gill, 79, posed for photos for the Indian press last week, proudly holding their healthy baby boy Arman. The couple had been trying to have a baby for decades, without success. They had been under a lot of pressure during that time to start a family. While most people would have accepted their fate and resigned themselves to a life without children, Daljinder and Mohinder persisted in their dream for a child. Daljinder started attending the National Fertility and Test Tube Baby Centre for IVF treatment in 2013 and successfully became pregnant last year. 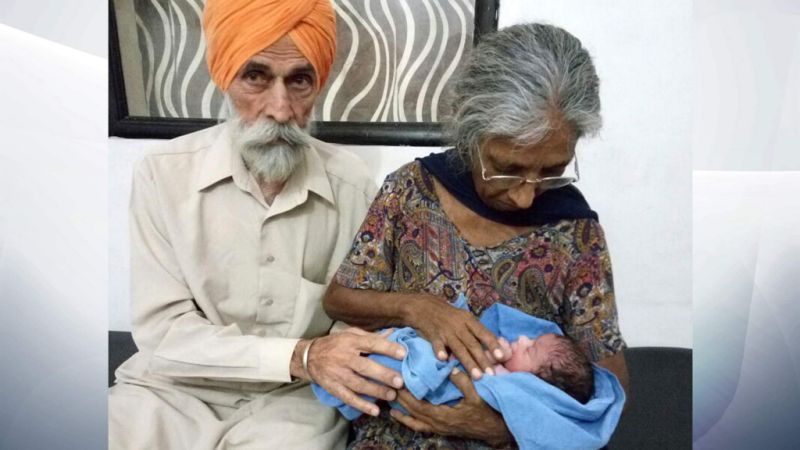 Specialists at the fertility clinic initially had reservations about offering Daljinder treatment because of her age. Dr Anurag Bishnoi told reporters: "I first tried to avoid the case because she was very weak, but then her medical reports were normal and she was fit to conceive." He added: "Our track record handling IVF in older women has been fairly good, but not everyone is fit to conceive. In her case, she looked visibly frail too, so I had to refer her to a cardiologist to get clearance for the procedure and for a battery of other tests." Meanwhile, Daljinder is over the moon about becoming a mother. She said: "I can live happily now. My life is complete." She is now the oldest woman ever to give birth.

例句：To do this and in vitro fertilization IVF drugs are the same.
这个和做IVF试管婴儿的药是一样的t2Lfr1bidnas*lXwh%I。

例句：Putin, we were told, does not pose for portraits.
我们知道，普京从不为肖像而摆姿势4jyH1t@&WN8v。

3) From whom was Daljinder Kaur under a lot of pressure?
a) her best friend
b) her husband
c) her family
d) her neighbours

4) What did the article say most childless couples would have accepted?
a) their fate
b) money
c) adoption
d) the truth

5) What kind of clinic did Daljinder start attending in 2013?
a) an ENT clinic
b) an IVF clinic
c) a BMI clinic
d) an MRI clinic

6) What did specialists at the clinic have reservations about?
a) Daljinder's age
b) a restaurant
c) flights to Delhi
d) their ability

7) How were Daljinder's medical reports?
a) dirty
b) old
c) normal
d) missing

8) How did a doctor say Daljinder looked?
a) frail
b) like a million rupees
c) like a mother
d) terrible

9) What did Daljinder have a battery of?
a) chickens
b) a Toyota Corolla
c) an iPhone
d) tests

10) What is Daljinder over?
a) being a mother
b) her husband
c) the moon
d) depression