The annual World Pie Eating Championships in England ended in disaster on Friday because the pies were toobig. A competition worker made a mistake and ordered pies that were the wrong size. In fact, the pies usedin the contest were twice as big as the rules say they should be. The pies for the competition in Wigan, England, got delivered to a nearby divorce party. The competition was stopped when organisers said the rules had been broken. The competition pies should be a diameter of 12cm and a depth of 3.5cm. The meat and potatoes in the pies should be no more than cubes of 1cm. Barry Rigby, 37, a part-time fitness instructor, had set the fastest time of 42.6 seconds. 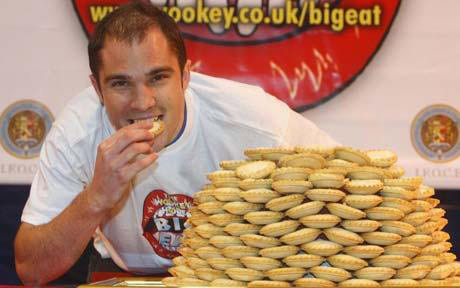 The annual World Pie Eating Championship is usually held at Harry's Bar in Wigan, England. It has been held since 1992. It started with competitors trying to eat meat and potato pies as fast as they could. However, in 2006, a vegetable pie was added after pressure from England's Vegetarian Society. The speed-eating competition has had a few problems in the past. In 2005, there were protests because the pies were not fromWigan. A year later, the competition had to change to meet government healthy-eating guidelines. Contestants then had to eat one pie as quickly as they could instead of as many pies as they could. And in 2007, disaster happened when the competition ran out of pies.

It would be unfair to say that all of it is because of my interesting part-time job, though.

What I teach in the Healthy Eating Handbook is how to achieve this balance, and maintain it for life.

It was like the sound of loud crackers, not one but several, we just ran out of there.

1.How often do the World Pie Eating Championships take place?

a) every four years

2.Who made a mistake and ordered pies that were the wrong size?

b) a speed eater

3.Where did the competition pies go to?

4.How deep should the competition pies be?

5.What is the job of the man with the quickest time?

6.When was the first World Pie Eating Championships?

9.When did the competition change to meet healthy-eating guidelines?

a) no one entered the competition

b) they ran out of pies