Voters in Switzerland have overwhelmingly rejected a proposal that would have meant introducing a guaranteed basic monthly income for all citizens. The referendum took place on Sunday and resulted in almost 77 per cent of voters opposing the plan. The idea was to provide a minimum salary to those who have been a citizen for at least five years, whether they worked or not. It was suggested the monthly amount could be around $2,500. The group behind the proposal argued that the initiative was necessary to overhaul Switzerland's social welfare system. A spokesperson said it would help fight poverty and inequality. He added that it would provide a top-up for people who earned less than the minimum wage. 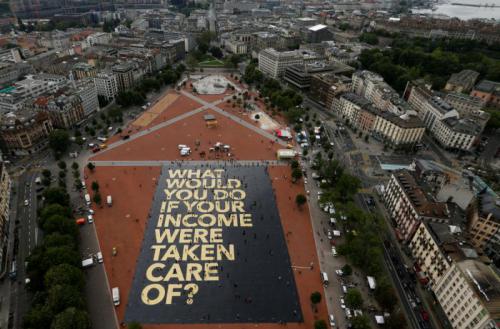 Supporters of the plan argued that because work was becoming increasingly automated across Switzerland, there were fewer jobs available for workers. Che Wagner from the campaign group Basic Income Switzerland argued that the monthly income would not be money for nothing. He said: "In Switzerland, over 50 per cent of total work that is done is unpaid. It's care work. It's at home. It's in different communities, so that work would be more valued with a basic income." Opponents said it would cause the country many immigration problems. Luzi Stamm from the Swiss People's Party said: "You would have billions of people who would try to move into Switzerland."

例句：I'll give you all the facts so that you can judge for yourself.
我把所有事实都告诉你， 使你得以自己作出判断ZVUq)&NrKvESE。

例句：Access to social grants for all who have on basic income.
增加社会补助金给所有人使得到基本收入;3YOx18Ak~q5|Q&KX。

1) What did voters reject that was guaranteed every month?
a) a referendum
b) monthly income
c) a vote
d) a job

4) What did someone say the plan was to overhaul in Switzerland?
a) basic income
b) all social problems
c) the social welfare system
d) unemployment

5) What did a supporter say the income would fight, besides inequality?
a) privacy
b) poverty
c) property
d) puberty
6) What did supporters say was becoming increasingly automated?
a) workers
b) campaigns
c) work
d) robots

7) What did a campaign group say the money would not be for?
a) home
b) care work
c) non-Swiss
d) nothing

8) How much work in Switzerland did a campaigner say was unpaid?
a) more than half
b) three-quarters
c) two-fifths
d) two-thirds

10) How many people did a party say would move to Switzerland?
a) millions
b) billions
c) trillions
d) quadrillions