Three men were rescued from a remote desert island in adventure-book style on Thursday. The three sailors became marooned on the tiny, uninhabited island of Fanadik in the South Pacific Ocean after their boat capsized. The island is several hundred kilometres north of Papua New Guinea. Even though they lost their vessel at night, the men managed to swim for nearly three kilometres to reach land. They remained on the island for three days and believed they were modern-day castaways. They wrote the word 'HELP' in the sand using palm leaves so they might be spotted by a plane. Their prayers were answered when a U.S. Coast Guard plane spotted their message on the beach. 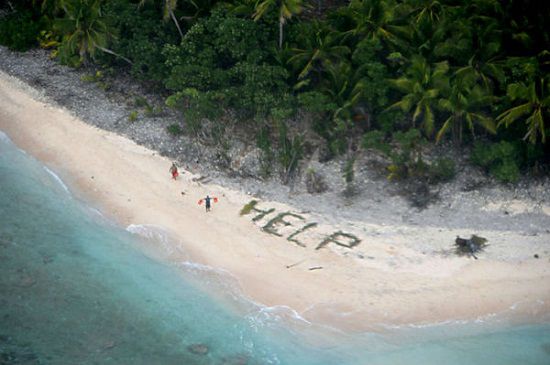 A Coast Guard spokesman spoke about the rescue. He said: "Our combined efforts, coupled with the willingness of many different resources to come together and help, led to the successful rescue of these three men in a very remote part of the Pacific." Once the men were found, their families were notified and they were put on a boat back to the island of Pulap, from where they had initially set out to sea. The Coast Guard said none of the men was injured. The rescue is one of many the U.S. Coast Guard has undertaken recently. Officials say that in the last two weeks, they have coordinated seven search-and-rescue missions in the South Pacific, saving the lives of 15 people.

例句：Nor will we forget the many Colombians who still have not found rescue from their guerrilla captors.
我们也不会忘记那些至今没有获救、仍被武装分子扣押的许许多多哥伦比亚人dR@E=%c=YIc。

例句：Defoe skilfully narrated the adventures of Robinson Crusoe on his desert island.
笛福生动地叙述了鲁滨逊·克鲁索在荒岛上的冒险故事P*sS6*WNQu。

例句：Even though away from us his spirit was still with us.
尽管离开了我们，他的灵魂还是与我们同在+ECX1^I[4KS)~*。

1.In what kind of style did the article say the men were rescued?
a) traditional style
b) old-fashioned style
c) modern-day style
d) adventure-book style
2.How many people lived on the island the men were stranded on?
a) over 1,000
b) none
c) 27
d) several hundred
3.What country was several hundred kilometres south of the island?
a) New Zealand
b) Fiji
c) Vanuatu
d) Papua New Guinea
4.What did the men use to write the word 'help'?
a) oil
b) pens
c) palm leaves
d) shells
5.What was answered by the U.S. Coast Guard?
a) a letter
b) the telephone
c) a difficult question
d) the men's prayers
6.Where did the men write their message?
a) in the jungle
b) on their boat
c) on the beach
d) on their mobile phones
7.Who was notified of the men's rescue?
a) the men's families
b) the U.S. President
c) the Coast Guard
d) the leader of the island
8.How many of the rescued men had sustained injuries?
a) 3
b) 1
c) 0
d) 2
9.How many search-and-rescue missions did the coast guard do recently?
a) 6
b) 7
c) 8
d) 9
10.How many people did the coast guard save in the past two weeks?
a) 15
b) 20
c) 10
d) 25