Doctors in Germany have warned people that headbanging could be bad for your health. Headbanging is a dance done by fans of heavy metal music. Dancers shake their heads backwards and forwards, and from side to side, very quickly. Doctors say that it is possible the dance can lead to brain injury. German doctors recently treated a 50-year-old fan of the heavy metal band Motorhead. His headbanging led to brain damage. Doctors said the man had no previous history of head injuries but had been headbanging regularly for many years. The doctors said the risk of damage to the brain from headbanging was still low and said heavy metal fans do not need to stop doing the dance. 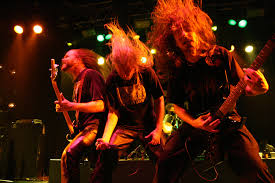 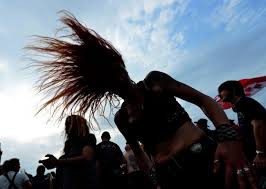 The man complained of bad headaches after going to a Motorhead concert. He went to hospital for a brain scan. Doctors found he had bleeding inside his brain. He needed an operation to repair the damage from the headbanging. Doctors drilled a hole in his brain to release some blood. Two months after the operation his headaches disappeared. The head doctor Ariyan Pirayesh said: "We are not against headbanging. The risk of injury is very, very low. I think if our patient had gone to a classical concert, this would not have happened." He had good news for heavy metal fans and said they should carry on enjoying dancing, saying: "Rock 'n' roll will never die. Heavy metal fans should rock on."

1.be bad for对…不利；对…有害
Well, immediately you get an objection? You say, how could nonexistence be bad for me?
你立刻就会提出异议,你说，不存在怎么可能对我来说有坏处？

2.heavy metal music重金属音乐；重金属乐
US Special Forces have a novel weapon in the fight to expel the Taliban - heavy metal music, AFP reported.
据法新社报道，美国驻阿富汗特种部队近日采用了一种新式武器对付塔利班——重金属摇滚乐JBzjTb(z@uXJbs[。

5.lead to导致；通向
For example, the transition from one activity to another may lead to a navigational message, if each activity participates in its own transaction.
例如，如果每个活动参与自己的事务，则从一个活动到另一个活动的转换可能导致产生导航消息mcbiPu+E!PI。

1.Where does this story take place?
a) Japan
b) Germany
c) Great Britain
d) USA
2.How old was the man who needed surgery?
a) 30
b) 40
c) 50
d) 60
3.What did the man's doctors say about his medical history?
a) it was very long
b) he was always ill
c) no history of head injuries
d) he'd banged his head many times
4.For how long had the man been headbanging?
a) many years
b) about 12 months
c) 2 hours and 40 minutes
d) since he was 15
5.What did doctors say about the riskiness of headbanging?
a) they didn't say anything
b) it was very low
c) over 50s shouldn't do it
d) very risky
6.When did the man get headaches?
a) after a concert
b) every morning
c) after too much alcohol
d) when he listened to loud music
7.What did the man find inside the man's brain?
a) CO2
b) too much water
c) bleeding
d) air
8.What did the operation release?
a) blood
b) air
c) pressure
d) water
9.What kind of concert did a doctor say might have been safer?
a) a quiet one
b) a jazz concert
c) Lady Gaga
d) a classical concert
10.What did a doctor say heavy metal fans should do?
a) chill out
b) sit down
c) rock on
d) switch off