听力文本
The vice-president of Korean Air has quit over an embarrassing incident involving a bag of nuts. Cho Hyun-ah, daughter of the airline's president, was on a flight from New York to South Korea on December 5. She was sitting in the first class cabin when a flight attendant served her a snack of a bag of macadamia nuts.Ms Cho, 40, was angry that the nuts were not given to her on a plate. She shouted at the flight attendant and told him the training manual said the nuts should be served on a plate. Cho forced the man to kneel down and apologise. She ordered him to leave the airplane, which had to return to the departure gate to let him off. The flight was delayed for 20 minutes because of Cho's actions. 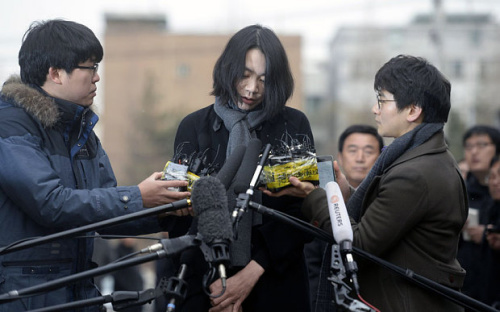 The incident is big news in Korea, where journalists are calling it "nut rage". Aviation officials in Korea could take legal action against Cho. They said her actions could have put the 250 passengers on the flight in danger. Officials may also question the captain for turning the aircraft round without a good reason.Cho's father asked the Korean public to forgive the "foolish" actions of his daughter. He told reporters:"I am making my apology both as head of Korean Air and as a father. I beg the people to blame me for the current situation, because everything is my fault….I failed to properly educate my daughter." He has also removed his daughter from all the posts she held in his companies.

A doctor, for example, can recommend a course of treatment for an illness;a lawyer can advise us on a course of legal action.

The temptation of getting allured by some sexy diva is something that can force the macho species kneel down on their knees and eventually surrender.

Remove from heat, and serve as a snack or addition to rice or noodles.

1.What position did the executive hold in Korean Air?

2.On which date did this incident happen?

3.How should the flight attendant have served the nuts?

b) with the bag open

c) with a drink

d) with a smile

4.What did the exec. force the flight attendant to do?

a) eat the nuts

b) open the bag

d) take the nuts back

5.How long was the flight held up for?

6.Who in Korea is calling this incident "nut rage"?

7.How many passengers were there on the plane?

8.Who else might be in trouble in the "nut rage" incident?

9.Who asked the Korean people to forgive the executive?

10.How many positions does the executive hold in her father's companies?