Aung San Suu Kyi is to be Myanmar's new foreign minister in the first civilian government the country has had in decades. Suu Kyi's National League for Democracy (NLD) party won an absolute majority in the general election in November 2015 under her leadership. This happened after decades of military rule. However, Suu Kyi is ineligible to become Myanmar's president as she is blocked by the country's constitution, which bars people with foreign family links from the post her two sons are British citizens. There are unconfirmed rumours that Ms Suu Kyi could also take on other roles and become the minister for education as well as the energy minister. 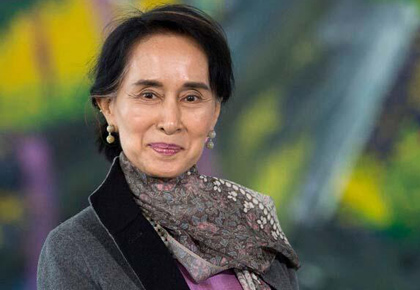 Suu Kyi was the sole woman named among 15 ministers. An NLD spokesman told reporters: "She will be the foreign minister, mainly. If she wants to share the duties she has in other ministries with qualified people, she can assign them." The foreign ministry role gives her international influence and a seat at Myanmar's influential military-dominated security council. Suu Kyi has made it very clear that she will rule above the president. She has tried without success in recent weeks to remove the constitutional barrier to her becoming president. Trevor Wilson, a former ambassador to Myanmar, said: "She wants to be at the heart of government. She wants to do it properly and formally and legally."

1.In how long has there not been a civilian government in Myanmar?
a) since 1782
b) decades
c) three years and two months
d) 24 years
2.When did the NLD win a general election?
a) January
b) last month
c) last week
d) November, 2015
3.What was there before the civilian government?
a) military rule
b) democracy
c) a monarchy
d) communism
4.What nationality are Aung San Suu Kyi's sons?
a) Burmese
b) American
c) British
d) Thai
5.What other role could Suu Kyi take on besides energy minister?
a) environment
b) education minister
c) president
d) equal opportunities
6.How many women have been named in the Myanmar government?
a) 1
b) 2
c) 3
d) 4
7.What does Aung San Suu Kyi's role give her a seat at?
a) the United Nations
b) a cinema
c) Myanmar's security council
d) the table
8.What did Suu Kyi unsuccessfully try to remove?
a) a constitutional barrier
b) a tooth
c) a general
d) a post
9.Who is Trevor Wilson?
a) a former ambassador
b) a journalist
c) Suu Kyi's biographer
d) a political prisoner
10.Where did Trevor Wilson say Aung San Suu Kyi wanted to be?
a) in her hometown
b) on a beach
c) Britain
d) at the heart of government