An 18-year-old girl in Japan is suing her local government after her school told her to dye her hair black. The third-year student attended a high school in the city of Habikino, just east of Osaka. Even though she had naturally brown hair, the school repeatedly told her to dye it black. She said she had to dye her hair black to follow the school's rules. Japan's 'Mainichi' newspaper reported that school staff started telling the girl to dye her hair every one to two weeks. In her second year, this changed to once every four days. The student's mother said her daughter eventually developed a rash on her scalp and that her hair became badly damaged. The girl also suffered from stress throughout her three years at high school. 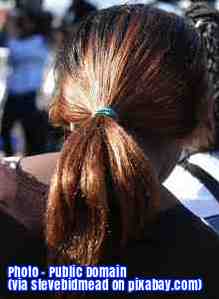 The student is suing the local government for $20,000 in damages. She told the court on October 27th that the school bullied her for three years to dye her hair. She said that the school would not accept her hair was naturally brown. She was banned from school trips and school festivals because of her brown hair. The girl told the court that teachers said things to her in front of the class that caused great embarrassment to her. This caused her psychological damage. She said that a teacher told her that she should not come to school if she didn't dye her hair. The girl said that she was so stressed one day that she collapsed and had to be taken to hospital by ambulance.

1.The girl also suffered from stress throughout her three years at high school.

2.She was banned from school trips and school festivals because of her brown hair.

Bicycles are banned from the new superhighway.
禁止在高速公路骑自行车GGc@DEhh(1R&xC4gos。