A war of words has broken out between Iran and Saudi Arabia following the execution of a religious figure by Saudi authorities on Saturday. The Shia Muslim cleric Sheikh Nimr al-Nimr was among 47 men the Saudi Arabian government put to death on terrorism charges. Saudi leaders said Mr al-Nimr had led anti-government protests in the east of the country in 2011-2012. He was previously convicted of disobedience and of bearing arms. Al-Nimr maintained he never carried weapons or called for violence but had encouraged Shia Muslims to resist police bullets using "the roar of the word" instead. Iran's leaders said al-Nimr was killed for being a Shia Muslim. Saudi Arabia is a largely Sunni Muslim country. 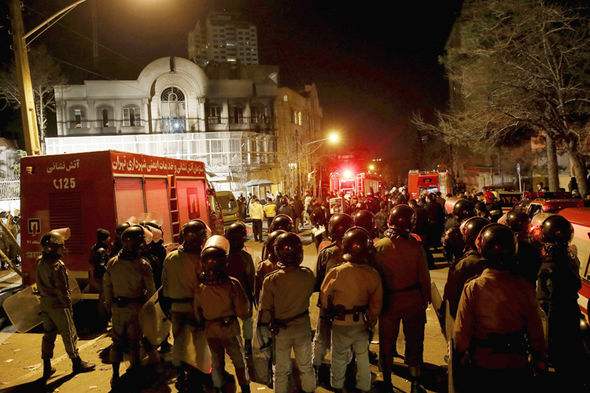 Protests against the execution took place in the Iranian capital Tehran on Sunday. Demonstrators stormed the Saudi Arabian embassy and set parts of it on fire. Iran's foreign ministry said Saudi Arabia would pay a "heavy price" for the execution, including the possible downfall of its government. The Saudi government said Iran had no right to create tensions and said the execution was an internal Saudi matter. The foreign ministry said the killing of Mr al-Nimr had nothing to do with his being a Shia Muslim. It said: "There is no difference between what a person does regardless of his ethnic origin or affiliation, or what he believes. We deal with facts and criminal intent."

例句：When does the wedding come off [take place]?

例句：Dozens of people have been injured and many vehicles set on fire.

例句：I shall go regardless of the weather.

例句：In 1977 he was convicted of murder and sentenced to life imprisonment.

1.On what day of the week was Nimr al-Nimr executed?

2.How many men were executed along with Nimr al-Nimr?

4.What did Nimr al-Nimr say he never carried?

5.What did Nimr al-Nimr encourage people to resist?

6.In what capital were there protests against the execution?

7.What did protestors do to a Saudi embassy?

b) threw paint at it

c) set it on fire

8.What did Iran's foreign ministry say Saudi would pay for the execution?

a) a heavy price

b) a million dollars

9.Who denied Nimr al-Nimr was killed for being a Shia Muslim?

a) the Saudi foreign ministry

10.What did the Saudi foreign ministry say it dealt with?