A woman had to go on her honeymoon alone because her husband could not get a visa for the trip. Newlyweds Huma Mobin and Arsalaan Sever, a young Pakistani couple, got married earlier this year. They paid for a romantic 10-day trip to Greece for their second honeymoon. They had already been to the Maldives for their first honeymoon. The couple received shocking news when the Greek embassy in Pakistan gave Huma a visa to travel to Greece, but did not issue one for her husband. They both decided that because the trip was already paid for, Huma should go to Greece alone, without her husband. A few weeks later, Huma's in-laws (Arsalaan's parents) decided to go with her. 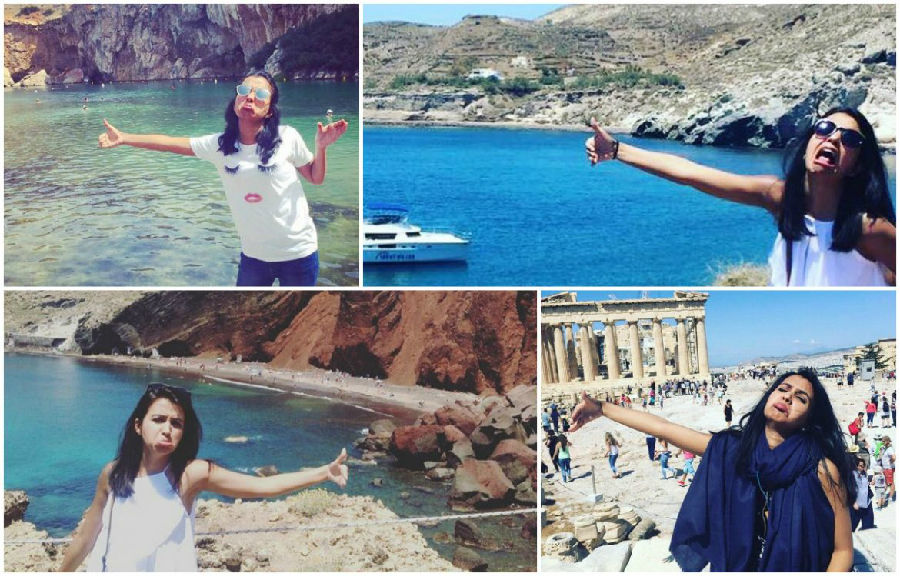 The photos of Huma on her solo honeymoon have gone viral on the Internet. She took photos in every location she visited. In each picture, she stretched her arm out around her missing husband and posed with a sad face to show how much she missed him. Huma said it was difficult to travel knowing her husband was in Pakistan. She said: "He's the life of the party; my better half. I wouldn't have gone without him but he forced me to." She added: "The first night I cried my eyes out on my mother-in-law's shoulder, who really comforted me and told me to make the best of it." Huma is now back with Arsalaan in Pakistan. They are hoping they will be able to go away together to celebrate their first wedding anniversary.

例句：I have had to pay for repairs to the house.
我不得不支付房屋维修费用GwVMvZzqxZ+m)|)。

例句：Jonah mentioned you both shared a philosophical approach to why things go viral.
约拿提到，你们俩曾经分享过为什么视频会走红的一个哲学方法ok%VB3]Kc+R-f1@。

例句：It all depends on what you decide to believe.
这一切都取决于你决定要相信什么mrkb2)dF5yy3p+。

例句：On your wedding anniversary: Love joins our present with the past and the future.
祝贺你们的结婚周年纪念日：爱连结我们的过去、现在和未来PsA9D4r[yu5fqJ!Flv。

1) What could the husband not get for the trip?
a) a plane ticket
b) time off work
c) a suitcase
d) a visa

3) Where did the couple go for their first honeymoon?
a) Fiji
b) Turkey
c) the Maldives
d) Bali

4) What kind of news did the article say the couple received?
a) shocking news
b) good news
c) headline news
d) travel news

5) Who went with the woman on her honeymoon?
a) no one
b) her best friend
c) her in-laws
d) her parents

6) Where have photos of the honeymoon gone viral?
a) a local photo shop
b) the Internet
c) Flickr.com
d) a hospital

7) What kind of look did she make for her honeymoon photos?
a) a happy face
b) a duck pout
c) a surprised look
d) a sad face

8) What did the woman cry on?
a) her mother-in-law's shoulder
b) her teddy bear
c) her bed
d) the beach

9) What did the woman call her husband the life of?
a) humans
b) Pakistan
c) the party
d) her life

10) What does the couple hope to celebrate together?
a) every minute spent together
b) their first wedding anniversary
c) the birth of their first child
d) Pakistan's independence day