Tonight police are investigating how seven people, reportedly a father and his six adult kids, lived in what they say was isolation in a small lockable room in this farmhouse. Set off the road and shrouded from view by a line of trees. All seven people now safe but police say they don't know why the family was there. Adding they may have been cut off from the outside world for the last nine years. It's the talk of the town. According to police a young man ventured out, reporting he was worried about the living conditions of his family. 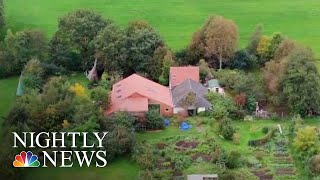 Chris westerby owns a nearby pub told nbc news that man wandered in, looking confused. He ordered five beers in the cafe and in a second he was gone. Westerby says something felt off. I thought i have to call the police because he needed help, he asked for help, he said he doesn't can go back anymore. At the farmhouse authorities arrested a 58 year old man on suspicion of illegal deprivation of liberty. His relationship to the others unknown, he'll be in court tomorrow.

1.cut off隔离；中断
They were almost completely cut off from the outside world.
他们几乎完全与外界绝缘了=KrGW(1&%fC5U,。

Nichols set off for his remote farmhouse in Connecticut...
尼科尔斯动身去他在康涅狄格州的偏僻农舍了@pvRQ.w(;uX-,.D*S。