It's not for nothing. Jimmy carter is viewed by many as a best example of a former president. He's worked tirelessly to end disease in Africa. He's traveled the world promoting and defending democracy. And then of course there is Habitat for Humanity, Where he's volunteered for decades. Not just as a spokesperson but as a hammer and saw swinging man of the people. So when carter took a hard fall no one would have blamed him for skipping his turn at building another house for the needy. 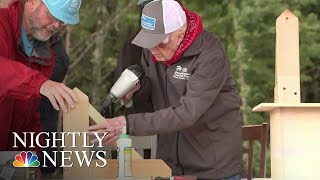 They took 14 stitches in my forehead and my eyes black as you notice. But i had a number-one priority and it was to come to Nashville to build houses. And he did indeed go back to work as he and Rosalynn have done now 36 times in 14 different countries, helping to build or renovate more than 4,000 homes. Among those who have held the highest office in the land, perhaps he among them truly is the public's servant.

1.blame sb for责怪
She doesn't blame anyone for her father's death.
她没把她父亲的死归罪于任何人!FJVL;JXtQT8w。

Her secretaries work tirelessly for a pittance.
她的秘书们为一点微薄的工资不知疲倦地工作vhK]WIP)n_c。