Tonight pro surfer Franklin O'Rourke is recovering after the scare of his life. I've never felt forced like that from any and want anything in my life so I was and I was in shock. This video shows him and other surfers in the water off Jacksonville Beach over the weekend, struggling with what he now thinks was a black tip shark. I've never seen one that close and in that kind of aggression. You know it was coming at me, not around me. I was scared, for sure. He had a really high energy level. Lieutenant Eli Pphillips was one of the first responders at the scene. 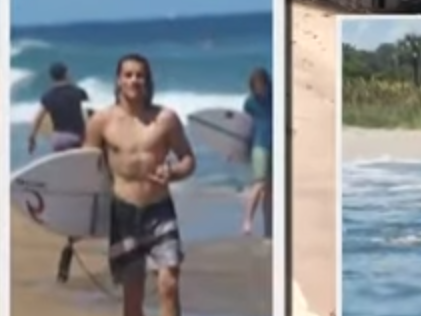 And he kind of didn't even realize what was happening while he was actually getting bit by it and then afterwards he was like, oh wow I just got bit by a shark. A hundred miles down the coast a Boogie Boarder was also bitten by a shark. He wasn't badly hurt either. Farther south this month in Cocoa Beach and Daytona Beach, other sightings. Experts say to avoid shark swimming groups, don't wear shiny jewelry and if you find herself being attacked don't play dead. Fight back. Back in Jacksonville O'Rourke says the scare won't keep him from the water. I'm still living, I'm still here. O'Rourke knows how lucky he is. He says right after the attack on these waters he went right out and he bought a lottery ticket. He figured that if he could survive a close encounter with a shark the odds must be in his favor.

1.struggle with与...斗争
He is currently locked in a power struggle with his Prime Minister.
他目前陷入了一场同总理的权力之争当中JJXCQ@8BMI1d.fC-lE。

The case also illustrates that some women are now trying to fight back.
这一事件也说明现在一些妇女正试图反击ws!hVHAg[.Ay;g。