MOST climbers simply chafe to reach the tops of mountains. Roger Payne was different. Although he had several first ascents to his name—Mount Grosvenor in China, Khan Tengri and Pobeda in Kazakhstan, in a career spanning 30 years—his priority was to go lightly, and leave no trace. His heroes were the alpinists of the early 20th century, George Mallory, Tom Longstaff, Freddie Chapman and the rest, who had climbed the world's greatest peaks in tweed jackets and leather boots. Like them, he went in a tiny team, often only with his wife, Julie-Ann Clyma, who was also a mountaineer. He took no oxygen, and avoided using fixed ropes. Every piece of rubbish or equipment was brought down off the mountain: not only his own, but also the tattered tents and empty cartons discarded by other people. In 1993, on K2, he also found and carried down the light, clean bones and ragged clothing of Art Gilkey, an American climber swept away by an avalanche in 1953. 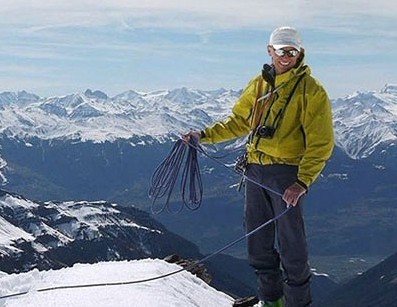 He went lightly and purposefully, but with great care. The mountains he loved so passionately were fickle, and demanded vigilance. Lithe and smiling, proud of his “boot-shaped” and blister-proof feet, he moved on exposed rock faces with the grace of a dancer and the fearlessness of a boy. He did things right: tents were dug in with proper snow-walls, supplies stored in well-marked snow-holes, attempts quickly abandoned if tiredness or bad weather struck. He would never push his luck on mountains, though he himself was never tired, leaping up from a schnapps-heavy evening to pull on his head-torch for a 1am start, and in booming cockney (“Are you climbing, or what?”) encouraging laggards onwards and upwards.

As he went, despite the stream of merry chatter about the relative merits of waterproof fabrics, or the perfect pH of beer, he was on the watch. For snow that was fresh and powdery, or piled into a cornice; for slopes that were too steep; for debris of fallen rocks, or the mid-morning heat of the sun. All these were omens of avalanches. He was expert on them, teaching climbers and students—especially in the Alps, where he lived later on—to recognise the warning signs, and developing a safety code that came to be used across Europe.

He knew avalanches at close quarters—at times, way too close. On Pumari Chhish in Pakistan in 1999 he and Julie-Ann had spent five nights trapped on an icefield, with avalanches breaking over their tent. On Nanda Devi East in 1994 they had to descend an avalanche, and just made it; but he had taken the precaution of appeasing the mountain gods with a prayer-flag planted at the summit. Like the Romantic poets (like Byron's Childe Harold, which he would quote in reams, word-perfect, as he climbed), he believed that mountains were sublime. He had a special love for the compactness of Sikkim, squeezed between Tibet and India, whose elegant, shining peaks he helped open again to mountaineering. A camera went with him always, strapped tight against his sternum, to record for others the beauty he saw. But some of his favourite quotations weighed up the beauty against the risk.

Down at sea-level, he was a tireless organiser. Everything to do with mountains demanded his attention and his infectious energy. He didn't belong behind a desk, and at Sunderland Poly, where he took a teaching degree in 1983, he bunked off lectures to go climbing. But if he had to protect and promote the peaks by doing paperwork, he would.

For 12 years he took charge at the British Mountaineering Council, swelling both membership and revenues, arranging competitions and writing memos late and long, until he would bolt from the Manchester office to scale the nearest crags. He brought mountaineering to schoolchildren (remembering how he had discovered it in the Scouts in Hammersmith), and to the disabled. He also took his expertise abroad, teaching young Iranians to climb and Sikkimese to become guides like himself; and he became a diplomat of the Greater Ranges, urging Indian and Pakistani climbers to forget their countries' long rivalry over the Siachen glacier.

The people of the mountains he remembered, too. On his ascent of K2 he took a pair of micro-hydroelectric systems to give non-smoky light and heat to two remote villages. This made the trip for him, though he never reached the top. He kept a watch on how climate change was affecting both the Himalayas and the Alps. But he never wanted to be part of any large and overstuffed expedition. Nor did he seek out the celebrity peaks, or brag about “conquering” the unsung 6,000-7,000-metre peaks he preferred.

For that reason, he was not among the best-known mountaineers. The first many people had heard of him was when, in early July, an avalanche caused by a toppling ice-block swept him away, with eight others, on Mont Maudit, beside Mont Blanc. He was guiding two clients along a popular route; the way and the weather looked safe. He was travelling light, on what he liked to call “another day in the office”. As no one knew better than himself, there was no perfect safety in mountains. But he would not have been in any other place, for, in Byron's words, “Where rose the mountains, there to him were friends”.