My Song: A Memoir of Art, Race and Defiance. By Harry Belafonte；
《我的歌：追忆艺术，种族与反抗》哈利·贝拉方特著。

IT ALL began with a set of Venetian blinds. In 1946 a couple in a Manhattan apartment building asked their janitor, a biracial Jamaican New Yorker newly returned from naval service in the second world war, to install a set in their flat. The task completed, they gave him two theatre tickets as payment. The janitor, having no money for the dinner that a proper date would have included, went on his own to see “Home is the Hunter”, a play about black servicemen returning to America after the war. He was enraptured. 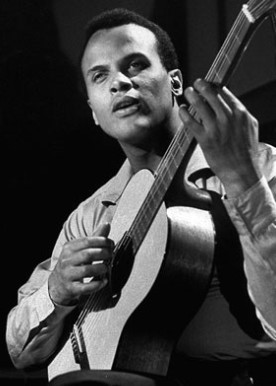 The tenants, Clarice Taylor and Maxwell Glanville, performed in the play, which was put on by the American Negro Theatre (ANT). The janitor was, of course, Harry Belafonte.

In short order Mr Belafonte also found his way into the ANT, where he not only acted but made “my first friend in life”, another poor, hustling West Indian named Sidney Poitier. The two of them hatched get-rich-quick schemes—Mr Poitier wanted to market an extract of Caribbean conch as an aphrodisiac—and they shared theatre tickets: they could only afford a single ticket between them, so one would attend before the interval and one after, then each would fill the other in. Mr Poitier got his break first: he took Mr Belafonte's place in a play that the latter, still employed as a janitor, missed because he had to collect his tenants' rubbish. It took Mr Belafonte several more years of struggling, and he gained fame not as an actor, for which he had trained, but as a singer, for which he had not, filling time during the interval at Lester Young's concerts, where his first backup band included Max Roach and Charlie Parker.

Looming over both this book and its subject's life are two ghosts: Millie, his formidable, perpetually dissatisfied mother; and Paul Robeson, whose combination of entertainment and political activism⑾ forged a path that Mr Belafonte would follow. But whereas Robeson's activism ran headlong into early cold-war paranoia, blacklists and McCarthyism, Mr Belafonte was luckier: his career rose more or less in tandem with the American civil-rights movement.

Martin Luther King junior sought him out in 1956, just a few months after rising to fame during the Montgomery bus boycott⒀. King was then 26, and a preacher at the Dexter Avenue Baptist Church in Montgomery, while Mr Belafonte was 28 and newly crowned “America's Negro matinée idol”. Mr Belafonte was sceptical of both religion and non-violence (“I wasn't nonviolent by nature,” he explains, “or if I was, growing up on Harlem's streets had knocked it out of me”), but was won over by King's humility. There is an especially touching scene from nine years later in which, following a celebrity-studded civil-rights fund-raiser in Paris, King, then a Nobel peace-prize winner, serves food to the assembled stars as “an exercise in humility, an act of abject gratitude to all these stars for coming out for him.” In a book that is riddled with many of the usual faults of celebrity autobiography—name-dropping, score-settling, preening and a rather ungallant treatment of his first wife and some of his children—Mr Belafonte's portrayal of King stands out for its unfussy warmth and unhagiographical affection.

After the 1960s, “My Song” goes downhill quickly, but that is hardly a surprise: maintaining fame is never as interesting as achieving it. The book is also too long. Mr Belafonte's ramblings about business deals that went sour and his agonising over the extraordinary privileges his children enjoyed grow tedious. And then there is his political judgment. Standing with Martin Luther King junior to fight injustice and oppression is quite different from standing with practised political oppressors such as Hugo Chávez and Fidel Castro. Still, Mr Belafonte does have a remarkable song to sing. Given its breadth, and the welcome disappearance of the segregated world in which it began, such a song will not be sung again.