A train crash in China
中国火车相撞事故

Suddenly the Communist Party’s showcase project is in trouble
中共的形象工程突然陷入困境 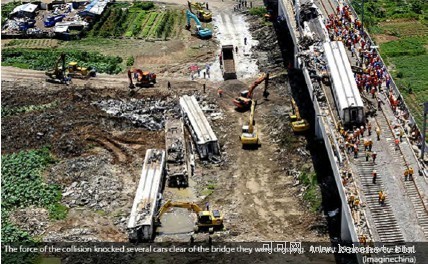 NO TRANSPORT accident has caused such an outcry in China as did the collision on July 23rd of two bullet trains, in which at least 39 people died. With the accident and the railway ministry’s crass response, public grievance is widespread. A cherished project, the rapid expansion of what is already the world’s longest high-speed rail network, is in tatters.

The crash on a viaduct near the coastal town of Wenzhou is above all a big embarrassment to the Communist Party itself. Only a few weeks earlier party officials had been crowing about the network’s latest, and most expensive, addition: a 1,320km (820-mile) line between Beijing and Shanghai that cost more than $30 billion. Its opening was timed as a celebration of the party’s 90th birthday on July 1st. Soon services on the new line were disrupted by power cuts. Angry passengers waited for hours in sweltering heat.

The collision occurred on another line that opened two years ago. It was the four-year-old network’s first fatal crash, and the bloodiest train accident since more than 70 people died in 2008. As it did then, the railway ministry responded to this week’s fatalities by sacking officials from the region responsible, in this case Shanghai. But as even some state-owned newspapers have pointed out, the man appointed to succeed the bureau’s disgraced chief had himself been demoted in connection with the 2008 accident.

Twitter-like social-networking services have played a huge role in exposing the government’s cack-handed response. These have become enormously popular (Twitter itself is banned). The government often tries to rein them in during crises by blocking the use of sensitive keywords. But in this case the authorities have resisted interfering. Online, many have demanded the dismissal of the new railway minister, Sheng Guangzu. The last one, Liu Zhijun, was sacked only in February for presumed corruption. His removal ushered in a less feverish approach to high-speed rail construction. But many Chinese still complain that the new services are too expensive and that cheaper, conventional services are being cut.

Mr Sheng has certainly failed to improve the typical high-handedness of his ministry. It waited more than a day before holding its first press conference on the accident. Rail officials have been sparing in their expressions of regret. Officials were slow to explain how one train crashed into the rear of the other. On July 28th they finally blamed signal failure. Most astonishingly, the ministry appeared in unseemly haste to remove the wreckage and, mystifyingly, even bury some of it.

In defiance of an order from rail staff, police reportedly persisted with their search through one badly damaged carriage and found a two-year-old survivor hours after the ministry had said there were no more signs of life. A video clip widely circulated online shows what some viewers say were two bodies falling out of carriages as they were being moved away from the line. Officials have also been criticised for allegedly offering victims’ families extra money if they agree to quick compensation deals.

The disaster is a setback for the ambitions of Chinese companies hoping to use their experience in building high-speed trains and railways to cash in on demand for such technology abroad. China’s relatively low prices will now be less of a selling point. For comparison, Japan has operated bullet trains for 47 years without a fatal accident.

Yet the party will worry most about the political repercussions. Some state-controlled newspapers have defied orders—secret but, as often, leaked on the internet—from the party’s powerful propaganda ministry to accentuate the positive, such as tales of heroism and sacrifice in the relief efforts. The Global Times, a Beijing newspaper, said the railway ministry was not alone in its “arrogance”. Public opinion, it said, could no longer stand this. “The relationship between the government and public is like that of a ship and water. Water can keep the ship afloat or sink it.” With even its own media giving such warnings, the party has reason to fret.