THE house at 963 Calle Neptuno, in the centre of Havana, was small, but Laura Pollan kept it beautifully. The grey floor-tiles with their snowflake motif were always swept clean, even though her fluffy mongrel terrier shed his long hair everywhere, and though the door was kept open to get some air in from the bike-filled, rowdy, dusty street. In the front living room she had cane chairs with heart-shaped backs, and triangles of lace decorated the shelves. Outside, the tiny back yard was a jungle of pot plants and climbers, with neatly folded washing hung against the ochre walls. And the tower of the Iglesia del Carmen watched over it all. 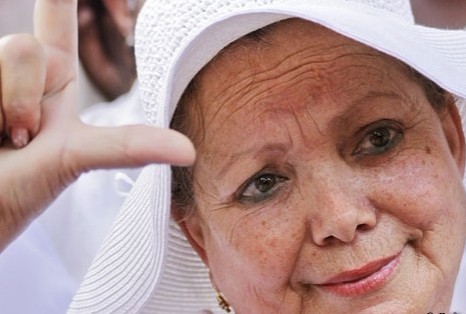 But her house was also a cell for liberty. The living-room walls were hung with lists of the names of political prisoners, their photos, and a huge chart that showed them bursting from their chains when her group notched up a success. Prisoners’ wives and daughters crowded there for her monthly Literary Teas. She once got 72 women in, under the slowly turning ceiling fan, and put up 25 overnight. They came from all over Cuba: Pinar del Rio, Santa Clara, Las Tunas, Manzanillo (in the east, where she was born), even from the Sierra Maestra, where Fidel Castro had holed up in the mountains to start his revolution. They gathered at her house because she was central, and had a telephone. After 2003 the phone kept ringing, and she would answer it in a whisper, knowing it was tapped; each call would end with “Cuidado”, “Be careful”. A security camera and floodlights appeared outside her front door, supplementing the plain-clothes men who loitered there. Her bookshelf now held a tiny statue of Santa Rita, the saint of the impossible.

What had started all this was the arrest of her husband, Héctor Maseda Gutiérrez, for “acting against the territorial integrity of the state”. Seventy-four others were arrested with him in that Black Spring of 2003, and given average prison sentences of 20 years. Ms Pollan knew he had done nothing. The picture of him she wore emblazoned on her T-shirt showed a mild, smiling man, an engineer, who kept his glasses on a cord round his neck. He liked to underline phrases in the newspapers and clip pieces out, organising them under “Politics” or “Environment”. She supposed he was just trying to point out contradictions in the government line. They didn’t discuss it, any more than she took part when his friends from the banned Liberal Democratic Party came round to talk. She would disappear to the kitchen then, making coffee, and leave the men alone.

But they were taken away. Husbands, fathers, brothers, disappeared. Ms Pollan came home from teaching evening class to find 12 state security agents invading her house, carrying away the clippings and two old typewriters. One agent stood by even as she and Héctor tried to say goodbye to each other. Two weeks later she started to bring together the women she kept meeting at the Villa Marista barracks and at various government offices, seeking news of their men. They became the Damas de Blanco, or Ladies in White.

Ms Pollan came brand-new to campaigning. She was a mother (of Laurita), a housewife and a teacher: someone who loved literature and had taught peasants to read in the early years of the revolution. She had never done anything wilder. Short, blonde and stout, she was not cut out to be hauled into a bus by the police. All she wanted was to see Héctor back, and all the others. Her group would meet each Sunday at the church of Santa Rita in Miramar, Havana’s grandest district, say the rosary, hear mass, and then walk ten blocks in silence along Quinta Avenida on the green verges under the palm trees. The women wore white, symbolising pure intentions, and carried gladioli, a single stem each.

Yet politics crept in. At the end of every march the women would chant “Libertad!”—for Cuba as a whole, as much as for their men. They would throw out pencils with Derechos Humanos on one side and Damas en Blanco on the other, hoping that, slowly, people would pick them up. Enemies called them “mercenaries” and “Ladies in Green”, in the pay of the United States, and Ms Pollan had to admit that they did get American dollars and American parcels for their imprisoned men. Shock mobs of other women were especially bused in to attack them, beat them and pull their hair. Ms Pollan could fight back with the best: when a man called her “Puta!” once, she threw her gladioli in his face. In one battle in September she was crushed against a wall, which may have set off the breathing troubles that killed her.

By then, the 75 prisoners they were campaigning for had been released; most by the intervention of the Catholic Church and the government of Spain, but around 20 by their own efforts. Héctor, gaunt and thin, came out only last February. The numbers of Ladies dwindled, to 15 or so, as their work seemed to be done. But for Ms Pollan it was not done. Her Ladies had to go on marching as long as the laws remained that could fill the prisons again. As long as Cuba was not free, she would go on sitting at her computer with her little dog stretched out on the tiles beside her, alert for the telephone, with her front door open and Santa Rita at the ready, and the ceiling fan turning slowly in the smothering air.