This is Scientific American — 60-Second Science. I'm Cynthia Graber.
Got a minute?
For thousands of years, what's called the Silk Road was a group of land and sea trade routes that connected the Far East with South Asia, Africa, the Middle East and southern Europe. Of course, when humans travel they carry their pathogens with them. So scientists and historians have wondered if the Silk Road was a transmission route not just for goods, but for infectious disease.
Now we have the first hard evidence of ancient Silk Road travelers spreading their infections. The find comes from a 2,000-year-old latrine that had first been excavated in 1992. The report is in the Journal of Archaeological Science.
"So the site is a relay station on the Silk Road in northwest China. It's just to the eastern end of the Tarim Basin, which is a large arid area just to the east of the Taklamakan desert, and not far from the Gobi Desert. So this is a dry part of China."
Piers Mitchell, paleopathologist at the University of Cambridge, and one of the study's authors, along with his student Ivy Yeh and colleagues in China.
In the latrine, archaeologists found used hygiene sticks wrapped with cloth. These were used for what you think they were used for. 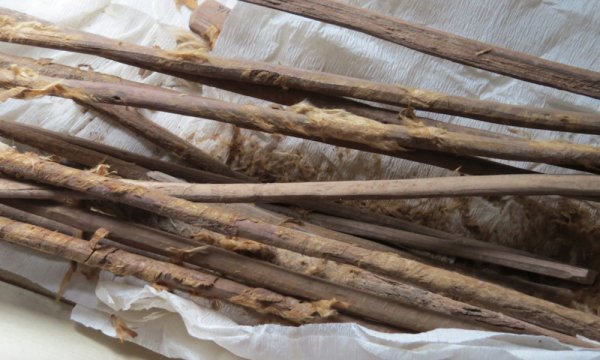 "This excavation was great because the cloth was still preserved and the feces was still adherent to the cloth on some of the sticks. So the archaeologist kept these sticks in the museum. And so my Ph.D. student, Ivy Yeh, who's first author on the paper, she went out to China took some scrapings from the feces adherent to the cloth. So we were then able to analyze that down the microscope when she brought it back to Cambridge."
Where they found eggs from parasites—including one from a liver fluke.
"And that's the exciting one because that's only found in eastern and southern China and in Korea, where they have marshy areas that have the right snails and the right fish."
The fluke needs snails and fish for its lifecycle, but there were no such snails or fish in this dry region of China. So the unlucky traveler who harbored the parasite had to have transported the disease to that spot.
"Well firstly it tells us that people were doing very long journeys along the Silk Road and you might think that's obvious. But no one really knew how long people were traveling. Some people may have been trading, only going short distances selling their goods on to the next person. And so the goods might have gone all the way along the Silk Road, but people might not. But we know that some people were doing huge distances..."
"Secondly it shows that this was, would be a viable route for the spread of those other infectious diseases like Bubonic plague and leprosy and anthrax that people had previously suggested might have been spread between East Asia and Europe along the Silk Road. Because modern genetic analyses have shown similarities between the strains of one end and the other."
Mitchell says there's much more work to be done to better understand the spread of diseases around the world. Perhaps from analyzing skeletons—or various other kinds of remains—to be found along the Silk Road.
Thanks for the minute for Scientific American — 60-Second Science Science. I'm Cynthia Graber.