JUDY WOODRUFF:In the 1930s, when the Nazis began their occupation of Europe, they set up ghettos for more than one million Jews, forcing them to live and work in fenced-off communities. Once the Nazis arrived at the Final Solution, the mass murder of Jews, most ghetto residents were killed.Some 25,000 of them, though, escaped the ghettos to hide in the woods, but few survived.The members of one family who spent years in the forest are now telling their story.Author Rebecca Frankel writes about them in her new book, "Into the Forest."She recently sat down with "NewsHour" producer Ali Rogin. 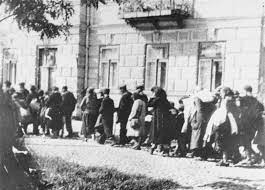 ALI ROGIN: Rebecca Frankel, thank you so much for being here. Your new book, "Into the Forest," is first and foremost a story of survival, and at the heart of it is the Rabinowitz family. So, can you tell me a little bit about them and what they endured?

REBECCA FRANKEL, Author, "Into the Forest: A Holocaust Story of Survival, Triumph, and Love": Sure. So, the Rabinowitz family was a normal family in 1930s Poland. They lived in a very small town called Zhetel. It was Morris and Miriam were married, and they had two young, very sweet, adorable daughters, Rochel and Tania. And they were basically just going about their lives. Morris was a lumber dealer. Miriam owned a small shop. And they were, of course, a Jewish family, which, ultimately, as the 1930s would continue and as Germany's influence in Poland and the politics started having a meddling influence, certainly, that changed for the worse.

ALI ROGIN:Their fortunes change. They are sent into the ghetto. And tell us about what their experience was like in the ghetto.

REBECCA FRANKEL: So, when the Germans invaded and they broke their pact with Russia in 1941, that's when things for Zhetel started to get really bad. All of the Jews of the small town in Zhetel, they were interned in a ghetto. And then the selection started. And what this meant, of course, was that the Germans were separating out the Jews that could provide some sort of service, were of some value in terms of labor, or they were doctors or craftsmen or architects or engineers.And the people who suffered most then, of course, were small children without parents, the elderly, the infirm, and even just women who didn't have working certificates.

But one thing for these small communities in these more forest-adjacent towns in Poland and Belarussia and other countries closer to Russia, one thing started to give them hope. And that was this idea that they could run away to the forest.

And what was happening then was that the Soviet fighters who had been sort of behind enemy lines at this point were regrouping into guerrilla fighting units, and they were slowly mounting this outside fight against Germany.And so these Jews in the ghetto, not many of them were able to do it, but some of them did escape their ghettos, and they did run to the forest.

And, of course, this is what happened with the Rabinowitz family. They were able to escape in August of 1942, right during the most terrible thing that happened to the Jews of Zhetel, which, of course, was the liquidation of the ghetto, when the Nazis basically killed all of the remaining Jews, except for a very small number.

By the time I was 30, we had three adorable children.

Already some people are asking whether scientists have any right to meddle in such matters.

The elderly are a formidable force in any election.

The schools were adjacent but there were separate doors.