It had snowed heavily the night before. Few cars were in the streets of Washington. The outgoing president, Dwight Eisenhower, was seventy years old. John Kennedy was just forty-three. He was the first American president born in the twentieth century. Both Eisenhower and Kennedy served in World War Two. Eisenhower had been commander of allied forces in Europe. Kennedy had been a young Navy officer in the Pacific. He came from a politically influential family from Boston, Massachusetts, but he was a fresh face in national politics. To millions of Americans, he represented a chance for a new beginning. Not everyone liked him, however. Many people thought he was too young to be president. Others did not like the idea of electing the nation's first Roman Catholic president.

Eisenhower's vice president, Richard Nixon, ran against Kennedy in the election of nineteen sixty. Many people believed Nixon was a stronger opponent of communism than Kennedy. The election of nineteen-sixty was one of the closest in American history. Kennedy defeated Nixon by fewer than one hundred twenty thousand votes. Now, on the steps of the Capitol building, he would be sworn-in as the nation's thirty-fifth president. One of the speakers at the inauguration was the eighty-six-year-old poet Robert Frost. The wind was blowing the paper in his hands and the sun was shining off the snow on the ground and into his eyes. Kennedy stood to help him. But the famous poet was unable to read much of the poem he had written specially for the ceremony. Instead, he began another one that he knew from memory. Here is a studio recording of Robert Frost reading his poem "The Gift Outright."

The land was ours before we were the land's. She was our land more than a hundred years Before we were her people. She was ours In Massachusetts, in Virginia, But we were England's, still colonials, Possessing what we still were unpossessed by, Possessed by what we now no more possessed. Something we were withholding made us weak. Until we found out that it was ourselves. We were withholding from our land of living, And forthwith found salvation in surrender. Such as we were we gave ourselves outright. (The deed of gift was many deeds of war). To the land vaguely realizing westward, But still unstoried, artless, unenhanced, Such as she was, such as she would become.

Soon it was time for the new president to speak. He was not wearing a winter coat or a hat, unlike many of the people around him. One of the issues that Kennedy talked about was the danger of what he called "the deadly atom." He was taking office during the Cold War between the United States and the Soviet Union. Both sides had atomic bombs. People worried that there could a World War Three that would end in nuclear destruction. Kennedy said both sides should make serious proposals for the inspection and control of nuclear weapons. He said they should explore the good in science, instead of the terrors. "Together let us explore the stars, conquer the deserts, eradicate disease, tap the ocean depths, and encourage the arts and commerce ... Let both sides join in creating a new endeavor, not a new balance of power, but a new world of law, where the strong are just and the weak secure and the peace preserved." 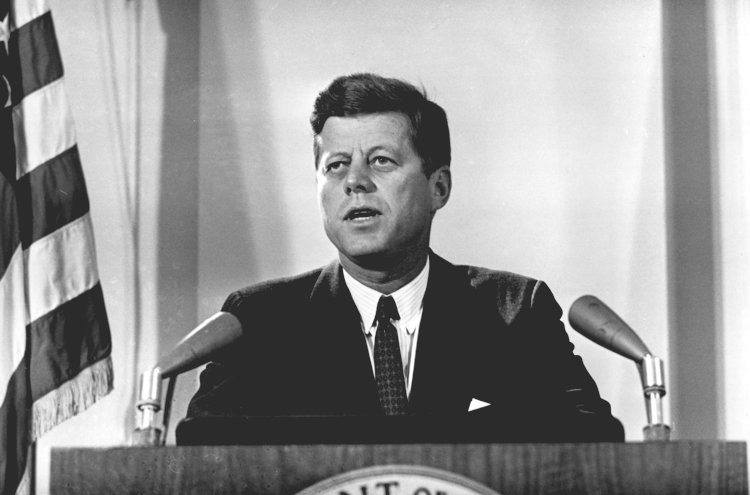 Kennedy also spoke about a torch of leadership being passed to a new generation of Americans. He urged young people to take the torch and accept responsibility for the future. He also urged other countries to work with the United States to create a better world. "The energy, the faith, the devotion which we bring to this endeavor will light our country and all who serve it -- and the glow from that fire can truly light the world. And so, my fellow Americans: ask not what your country can do for you -- ask what you can do for your country. My fellow citizens of the world: Ask not what America will do for you, but what together we can do for the freedom of man."

John Kennedy was in office less than two weeks when the Soviet Union released two American airmen. The Soviets had shot down their spy plane over the Bering Sea. About sixty million people watched as Kennedy announced the airmen's release. It was the first presidential news conference broadcast live on television in the United States. Kennedy welcomed the release as a step toward better relations with the Soviet Union. The next month, Soviet leader Nikita Khrushchev made another move toward better relations. He sent Kennedy a message. The message said that disarmament would be a great joy for all people on earth. A few weeks later, President Kennedy announced the creation of the Peace Corps. He had spoken about his idea during the election campaign. The Peace Corps would send thousands of Americans to developing countries to teach and provide technical assistance. Soon after the Peace Corps was created, another program was announced. The purpose of the Alliance for Progress was to provide economic aid for ten years to nations in Latin America.

Another thing that Kennedy had talked about during the election campaign was the space program. He believed the United States should continue to explore outer space. The Soviet Union had gotten there first. It launched the world's first satellite in nineteen fifty-seven. Then, in April nineteen sixty-one, the Soviet Union sent the first manned spacecraft into orbit around earth. That same month, the new American president suffered a foreign policy failure. On April seventeenth, more than one thousand Cuban exiles landed on a beach in western Cuba. They had received training and equipment from the United States Central Intelligence Agency. They were supposed to lead a revolution to overthrow the communist government of Fidel Castro. The place where they landed was Bahia de Cochinos -- the Bay of Pigs. The invasion failed. Most of the exiles were killed or captured. It was not Kennedy's idea to try to start a revolution in Cuba. Officials in the last administration of Dwight Eisenhower had planned it. However, most of Kennedy's advisers supported the idea. And he approved it. In public, the president said he was responsible for the failure of the Bay of Pigs invasion. In private, he said "All my life I've known better than to depend on the experts. How could I have been so stupid." What happened in Cuba damaged John Kennedy's popularity. His next months in office would be a struggle to regain the support of the people. That will be our story next week.

1.outgoing 即将离职的
She arrived to receive the sash of office from the outgoing president.
她走上前去从即将离职的总统手中接过了就职腰带2PQd5^pZDo*x&PHas。
2.run against 与…竞选
McGovern started to run against nixon.
麦戈文开始与尼克松竞选&R^&IY+odYX。
3.swear in 使宣誓就职
Mary Robinson was formally sworn in as Ireland's first woman president.
玛丽·鲁宾逊正式宣誓就职爱尔兰的首任女总统sTyI3#2~&MbvHvL。
4.inauguration 就职典礼
We are only a month away from the inauguration of a new president.
我们离新总统就职只有一个月了9IWA9cKm1HGm7。
5.endeavor 努力
We made an earnest endeavor to persuade her.
我们郑重其事地努力说服她whTXe#q9!&vd。