Dwight Eisenhower was elected president in nineteen fifty-two. By nineteen sixty, he had served two terms. The twenty-second amendment to the Constitution said he could not be re-elected. Eisenhower was hugely popular when he first came to office. And his first term was considered successful. He created a new government agency for education and health care. He led a congressional effort to improve the tax system. And, under his leadership, a peace treaty ending the Korean War was signed. Eisenhower also met with Soviet leaders Nikolai Bulganin and Nikita Khrushchev. This began a tradition of meetings between the leaders of the United States and the Soviet Union. Experts believe these meetings probably helped prevent a nuclear war between the two countries. At the end of Eisenhower's first term, he was still very popular. He had suffered a heart attack. But he felt strong enough to campaign again. His Democratic Party opponent was Adlai Stevenson. They had been the candidates in the presidential election four years earlier. This time, Eisenhower won almost ten million votes more than Stevenson. That was an even bigger victory than in nineteen fifty-two. Eisenhower's second term, however, presented problems. The Soviet Union launched the space age by putting the world's first satellite into earth orbit. Fidel Castro established a communist government in Cuba.

Many white Americans were fighting the Supreme Court's decision to end racial separation in schools. And the American economy suffered a recession. Eisenhower's popularity dropped during his second term. This would make it more difficult for the Republican Party's next candidate for president. The delegates who attended the Republican nominating convention in the summer of nineteen sixty feared that the party would lose the election in November. They had to find the strongest candidate possible. Many believed that Richard Nixon was the strongest. Nixon had been a senator and a member of the House of Representatives. He had been Eisenhower's vice president for eight years. When Eisenhower suffered several serious illnesses, Nixon had a chance to show his abilities to lead the nation. He showed great strength while facing an angry crowd during a trip to South America. He also gained support when he defended the United States in an unofficial debate with Khrushchev during a trip to the Soviet Union. Nixon's closest opponent for the Republican nomination was Nelson Rockefeller. Rockefeller was governor of New York. He came from one of the richest families in America. At the convention, Richard Nixon easily won the support of the Republican Party. 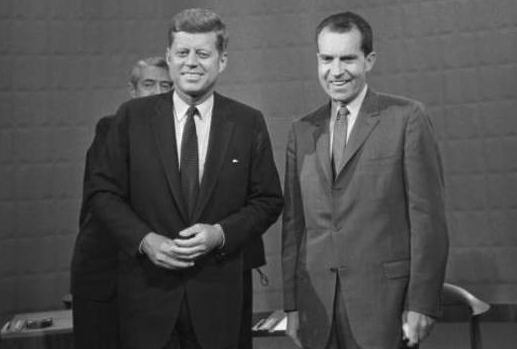 The delegates elected him on the first vote. He accepted the nomination. And he called for new efforts for peace and freedom around the world. The race for the Democratic nomination was much more difficult. He Democratic Party thought it would have no problem winning the presidential election. Many candidates entered the competition for the nomination. One was Senator Hubert Humphrey of Minnesota. Another was Senator John Kennedy of Massachusetts. Humphrey had been elected to the Senate three times. He was a strong activist for civil rights, peace, and social improvements. Kennedy was a Navy hero in World War Two. He was handsome and only forty-three years old. He also was a member of the Roman Catholic Church. And no catholic had ever been elected president of the United States. Kennedy and Humphrey began to enter local primary elections in different states. The purpose of the primaries is to test voter support for candidates. Kennedy won an important primary in the state of Wisconsin. However, the Protestant Christian areas of the state did not support him. The question then became: Could he win in West Virginia? Most of the voters in that state were Protestants. On the last night of the primary campaign in West Virginia, Kennedy spoke about his religion. He said the president of the United States promises to defend the Constitution. And that, he said, includes the separation of the government from any religion or church. Kennedy won a large victory in West Virginia. He then went on to win many votes in other primary elections.

He received the nomination on the first vote of the Democratic Party convention. In his acceptance speech, he said he would ask Americans to help their country. He said he would ask them to sacrifice for their country. After the party conventions, the two candidates -- Kennedy and Nixon -- began to campaign around the nation. Nixon charged that Kennedy was too young to be president. He said Kennedy did not know enough about governing. Kennedy attacked the Republican record of the past eight years. He said president Eisenhower and Vice President Nixon had not done enough to bring progress to the nation. Protestant groups expressed concerns about Kennedy's religion. They wondered if he would be influenced by the Pope. They asked if the leader of the Roman Catholic Church would try to make policy for the United States. Kennedy answered by repeating his strong support for the constitutional guarantee of separation of church and state. Public opinion studies showed the election campaign to be very, very close. Then, the candidates agreed to hold four debates. The debates would be broadcast on television. In the first debate, they showed they did not differ too widely on major issues. Kennedy, however, appeared calm and sure. Nixon, who did not feel well, appeared thin and tired.

Many people who had not considered voting for Kennedy now began to change their minds. To them, he looked like a president. In the fourth debate, they expressed widely different opinions about whether the United States was making progress. Kennedy believed there had been little progress under Eisenhower and Nixon. He said: KENNEDY: "Franklin Roosevelt said in nineteen thirty-six that that generation of Americans had a rendezvous with destiny. I believe in nineteen sixty and sixty-one and two and three, we have a rendezvous with destiny. And I believe it incumbent upon us to be defenders of the United States and the defenders of freedom. And to do that, we must give this country leadership. And we must get America moving again."Nixon disagreed sharply. He believed the United States had not been standing still. Yet he believed it could not rest, either. He said: NIXON: "It is essential with the conflict that we have around the world that we not just hold our own, that we not keep just freedom for ourselves. It is essential that we extend freedom, extend it to all the world. And this means more than what we've been doing. It means keeping America even stronger militarily than she is.

It means seeing that our economy moves forward even faster than it has. It means making more progress in civil rights than we have, so that we can be a splendid example for all the world to see."Another issue of the nineteen sixty presidential debates was the Chinese attack on the islands of Quemoy and Matsu in the Formosa [Taiwan] Strait. Another was how to deal with Soviet leader Nikita Khrushchev. Most people seemed to feel that Kennedy won the first debate. Experts thought Nixon probably won the second one. And both men did about the same in the last two. After the debates, the presidential candidates campaigned around the country again. Nixon proposed a trip to Eastern Europe and a meeting with Khrushchev, if he were elected. Kennedy proposed what he called a Peace Corps. The Peace Corps would be a program to send Americans to developing countries to provide technical aid and other help. On Election Day in November, the voters chose John Kennedy. His victory, however, was a close one. Almost sixty-nine million people voted. He won by fewer than one hundred twenty thousand votes. The United States now had its thirty-fifth president. He was the youngest and the first Roman Catholic. The beginning of John Kennedy's administration will be our story next week.

1.headed for 前往；出发；取向于
1.Protestant group新教组织
She became active in her church, a small Protestant group in Moscow, and says that gave her strength as she continued searching for a career.
她活跃于莫斯科一家小型新教组织，认为正是这里给予她继续寻找职业的力量McjWIJZVl_#%MMSs。
2.civil rights 民事权利
The civil rights bill carried by a large majority.
公民权利法案获得大多数同意而通过VayZ,Oi~WXa1BenpbL。
3.Catholic Church 天主教会
In France, Italy and Spain the Catholic church insisted on the use of female midwives, to protect female modesty.
在法国、意大利和西班牙，天主教会坚决主张使用女性助产士，以保护女性的羞耻aP_L.m2]%um。
4.presidential candidates 总统候选人
Miller continued: “Senators and presidential candidates would have us believe that the troops in the Middle East are dying for no reason.
米勒还说："参议员和总统候选人试图让我们相信，驻扎在中东的军人是在平白无故地送命CkIl6#KNul,yQ+6Zw。"
5.recession 衰退；不景气
During the last recession in the early 2000’s, I was one of those statistics.
2000年初，在上一次经济衰退时，我是那些统计数字中的一员KoM*n(tfqU4~n9JW。