THE MAKING OF A NATION -- a program in Special English by the Voice of America.

Throughout history, power passes from one nation to another. Persia, for example, was the world's most powerful nation at the time of Alexander the Great. Rome became a great power under Julius Caesar. And France was so under Napoleon. Through the middle of the twentieth century, Britain was the most powerful nation in the world. Britain, however, suffered terribly during World War Two. And, after the war, power passed to the United States. One can almost name the day when this happened. It was February twenty-first, nineteen forty-seven. Officials at the British Embassy in Washington called the American State Department. They had two messages from their government.

The first was about Greece. The situation there was critical. Greece had been occupied by Germany during the war. Now it was split by a bitter civil war. On one side of the fighting was the royal family supported by Britain. On the other side were communist-led rebels supported by Yugoslavia and the Soviet Union. British forces had helped keep Greece from becoming communist during nineteen forty-four and nineteen forty-five. A few years later, Britain could no longer help. It needed all its strength to rebuild from the world war. So, on that February day in nineteen forty-seven, Britain told the United States it would soon end all support for Greece. Britain's second message that day was about Turkey. Turkey was stronger than Greece. But it, too, might become communist unless it received outside help.

Britain warned the United States that the Soviet Union would soon extend its control all the way across Eastern Europe to the eastern Mediterranean. It called on President Harry Truman to provide strong American support to help Greece and Turkey resist the communist threat. Britain, in effect, was asking the United States to take over leadership of the Western world. The United States was ready to accept its new position. For months, relations between the United States and the Soviet Union had been growing worse. The two countries had fought together as allies in the Second World War. But Soviet actions after the war shocked the American people. The Soviet Union wanted to block western political and economic influence in central and Eastern Europe. It wanted to extend its own influence, instead. So, after the war, it forced the establishment of communist governments in a number of countries. In Hungary, Bulgaria and Czechoslovakia, it sent troops to make sure its political demands were met.

Britain's wartime prime minister, Winston Churchill, spoke about the situation in a speech at a college in the American state of Missouri. Churchill warned that the Soviet Union was trying to expand its power. He described it as an "iron curtain" falling across the middle of Europe. The iron curtain divided Europe into a communist east and a democratic west. The situation was made even more tense by news coming from China. China was a divided nation at the end of World War Two. The forces of Nationalist leader Chiang Kai-shek controlled the southwest part of the country. Communist forces under Mao Zedong controlled the north. Both the United States and the Soviet Union expected that Chiang Kai-shek would be able to unite China.

Chiang and the Nationalists won several early victories over the Communists. But Mao and his forces used the people's growing hatred of the Nationalist government to win support. Slowly, they began to win battles and capture arms. Early in nineteen forty-nine, communist forces took control of Beijing and Tientsin. Then they captured Shanghai and Canton. By the end of the year, Chiang and his Nationalist forces had to flee to the island of Taiwan. The fall of the Nationalist government in China caused a bitter political debate in America. Some critics of the Truman administration charged that the United States had not done enough to help the Nationalists. The Truman administration rejected the charges. It said Chiang caused his own defeat by failing to reform and win the support of the Chinese people. 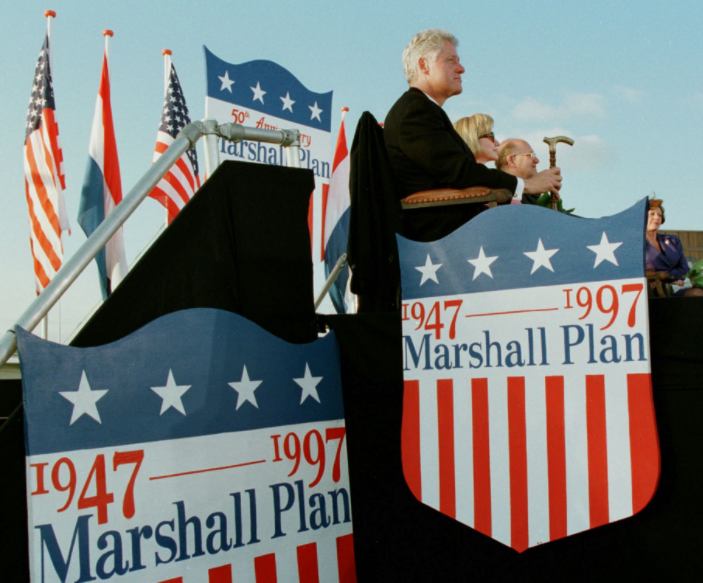 Secretary of State Dean Acheson described the defeat this way:"Nothing that the United States did, or could have done, within the limits of its powers, could have changed the result. It was the product of forces within China. It was the product of forces which the United States tried to influence, but could not." The United States was more successful in its policies toward Europe. The British warnings about the communist threat in Greece and Turkey caused President Truman to speak to the Congress. He said, "I believe it must be our policy to support free people who are fighting attempted overthrow by armed minorities or outside pressures." Truman called on the Congress to give him four hundred million dollars in aid for Greece and Turkey. After a brief but intense national debate, the Congress agreed. Truman then launched an effort to save the Greek economy and reorganize the Greek army. Soon after that, Yugoslavia and the Soviet Union ended their aid to Greek rebels. The civil war in Greece ended.

American help for Greece and Turkey was the first step in what became known as the Truman Doctrine. The goal of this policy was to stop Soviet aggression anywhere in the world. Truman was willing to use military force to stop the spread of communism. But he also believed it was equally important to build up western European nations so they would be strong enough to defend themselves. Europe was suffering terribly after World War Two. There were severe shortages of food and fuel. Crops were destroyed. Many Europeans were beginning to look to the communists -- to anybody -- to save them. This is one reason why Truman and his advisers developed a plan to rebuild the economies of Europe.Secretary of State George Marshall proposed the idea. It soon became known as the Marshall Plan.

President Truman explained why there had to be a Marshall Plan. People were starving, he said. There had been food riots in France and Italy. People were cold. There was not enough fuel. And people were sick. Tuberculosis was breaking out. "Something had to be done," Truman said later. "The British had no money. They were pulling out of Greece and Turkey. They could not help. The United States had to do it, had to do it all." Marshall Plan aid was offered to all countries in Europe. The Soviet Union and its allies refused help. Sixteen other countries, however, welcomed the aid. From nineteen forty-eight to nineteen fifty-two, the economic cooperation administration of the Marshall Plan worked with these countries. It spent thirteen thousand million dollars.

The plan worked. Agricultural production in Marshall Plan countries increased by ten percent. Overall industrial production increased by thirty-five percent. Production in some industries, such as steel, increased by much more. There were political results, too. Stronger economies helped prevent communists from gaining control of the governments in France and Italy. Some Europeans criticized the Marshall Plan. They said it increased tensions between the United States and the Soviet Union in the years after the war. Yet few people could argue that the plan was one of the most successful international economic programs in history. You have been listening to THE MAKING OF A NATION, a program in Special English by the Voice of America. Your narrators have been Rich Kleinfeldt and Ray Freeman. Our program was written by David Jarmul. Join us again next week at this same time for another program about the history of the United States.