I'm Mary Tillotson. And I'm Steve Ember with the VOA Special English program PEOPLE IN AMERICA. Today, we tell about writer Zora Neale Hurston. She was one of the most recognized black women writers. She wrote seven books and more than one hundred short stories, plays and articles for magazines.
Zora Neale Hurston was born in eighteen ninety-one in Notasulga, Alabama. A short time later, her family moved to Eatonville, a small town in central Florida. All of the people of Eatonville were African-American. The town shaped Hurston's life and her writing. As a child, she would listen closely to the stories told by the adults in the town. Several of her books take place in communities very similar to Eatonville. The people she wrote about in her books are very similar to people she knew there.
Zora was born at a time of racial tensions between blacks and whites in the southern United States. But she never felt angry about being black. In her stories, she described Eatonville as a place where black Americans could live as they pleased.
Zora Neale Hurston was known for her ability to tell a story. Storytelling is an important part of many cultural traditions. African-American storytelling is a strong family tradition that dates back hundreds of years. It is a way for people to establish their identities in often unfriendly areas as they struggle to hold their communities together.
Zora Neale Hurston was the fifth of eight children. Zora's mother was a schoolteacher. Her father was a builder and a church preacher. He also became the mayor of Eatonville. Zora's mother died in nineteen-oh-four, when Zora was thirteen years old. Her mother's death severely affected Zora's life. She was rejected by her father and his second wife. Zora was forced to take care of herself.
She left Eatonville and moved north when she was fourteen years old. She worked for a traveling theater company. She also worked as a maid, cleaning the homes of white people. One of her employers recognized Zora's abilities. She made it possible for her to attend high school in Baltimore, Maryland.
Zora was twenty-six years old when she began high school. But she said she was only sixteen. Throughout her life, she often said she was younger than she really was.
In nineteen eighteen, Zora Neale Hurston attended Howard University in Washington, D.C. She studied with Alain Locke. He was a professor of philosophy and an expert on black culture. She earned money by working as a maid and doing other work.
Hurston published her first short stories at Howard University. Her stories were about black folklore and life in Eatonville. She won prizes for her writings that were published in newspapers and magazines. The early nineteen twenties marked the beginning of Zora Neale Hurston's life as a writer.
In nineteen twenty-five, Hurston traveled to New York City. This was during the period known as the Harlem Renaissance. Harlem is a famous area in New York. The Harlem Renaissance was a period in which black artists explored their culture and showed pride in their race. This was expressed in literature, music and other art forms. Hurston and her stories about Eatonville became important during the Harlem Renaissance. She met other young black writers of the time, such as poet Langston Hughes.
Hurston became the first black student to attend Barnard College in New York. She studied with anthropologist Franz Boas. She became interested in anthropology -- the study of the origin, development and actions of humans. Boas recognized Hurston's storytelling ability and deep interest in the black culture of the South. He urged her to do more research there.
Hurston received financial support for most of her research from a wealthy woman in New York named Charlotte Osgood Mason. During the next several years, Hurston traveled in Florida and the Caribbean to collect and write stories about what she saw. She learned about the traditions of the people she met. She spoke with men and women, young and old, collecting their stories in their own words. She wanted to keep the language exactly as they told it. Many of the stories were like those she had heard as a child.
In nineteen thirty-six, Hurston traveled to Jamaica and Haiti with a financial award from the Guggenheim Foundation. The Caribbean people accepted her as one of them. They spoke with her freely, even about religious traditions. In Haiti, she learned a great deal about the voodoo religion. 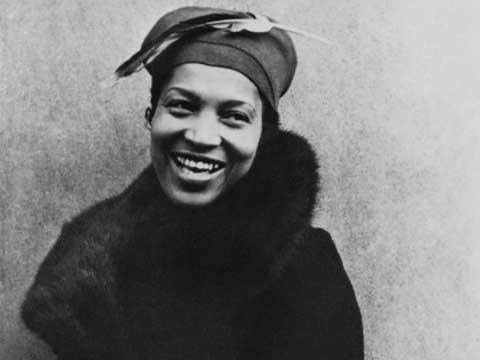 Hurston published two important collections of stories based on her research. They were "Mules and Men" and "Tell My Horse." Both examined the voodoo religion.
Zora Neale Hurston published her first book, "Jonah's Gourd Vine," in nineteen thirty-four. The story takes place in a small Florida town. It is about two people similar to her parents. Her second book, "Their Eyes Were Watching God," was published three years later. It is widely considered her most important work. She wrote the book in seven weeks while she was traveling in Haiti. It is the story of a black woman's search for happiness and her true identity, during twenty-five years and three marriages.
In nineteen forty-two, Hurston published a story about her own life, called "Dust Tracks on a Road." But the book was widely criticized. Literary experts said it was full of false information. Others said it added to the mystery surrounding the writer.
Hurston's last two novels were the biblical story "Moses, Man of the Mountain" and "Seraph on the Suwanee." This was the only book she wrote about white people.
Zora Neale Hurston's stories were about the pain-filled and sometimes magical world that surrounded blacks in the South. The stories tell about faith, love, family, slavery, race and community. They also include humor. Hurston was well known for her writing. She also became known for her outspoken opinions, her clothing and the great pride she had in herself and her race.
She was married three times. But she found it impossible to settle down. Her husbands usually expected her to give up her writing. But she said that was the one thing she could not do.
Hurston received praise for her work by both blacks and whites. But not everyone enjoyed her work. Some of the writers of the Harlem Renaissance criticized her for writing about black culture instead of relations between the races. Many blacks also rejected Hurston's political ideas and her support for racial separation laws in the South.
Hurston, however, made no apologies for her work. She said the richness of black culture existed to be enjoyed, celebrated and made into literature.
During the late nineteen forties, she began to publish less and less. She was arrested and charged with sexual wrongdoing with a ten-year-old boy. The charges were later dropped, but the event affected her work and her life.
In nineteen fifty, Hurston returned to Florida. Although her work was quite popular, she was unable to make a living with her writing. In her later years, she worked as a teacher, a librarian and as maid. In nineteen fifty-nine, Hurston suffered a stroke and entered a nursing home in Fort Pierce, Florida. She died there a year later and was buried in an unmarked grave.
Today, Zora Neale Hurston has not been forgotten. She influenced other African-American female writers, including Alice Walker. Because of Walker's efforts, Hurston's work was rediscovered in the nineteen seventies. During the nineteen nineties, her book "Their Eyes Were Watching God" sold more than one million copies. Many young people in American schools are reading the book. In addition, two of Hurston's plays have been produced. New books have been written about her. And her work and life are the subject of many studies, conferences and festivals.
In nineteen seventy-three, Alice Walker placed a marker in Fort Pierce, Florida, where Hurston is believed to be buried. The stone reads, "Zora Neale Hurston, A Genius of the South."

You should end up with something similar to what I have below.
操作结束后，你应该会得到与下图相似的结果H8]kOP(diTaR6M4i。

The issue is not a new one. It dates back to the 1930s at least.
这杂志不是新的，它至少可以追溯到20世纪30年代tH%EJGaBBW5HT#Jh。

Cellphones, or mobile phones, make it possible for us to talk to anyone.
手机，或者说移动式电话机，使得我们在任何地方与任何人通话@n%fTswq;d。

I dont like the pattern full of curves and angels.
我不喜欢这种满是曲线和尖角的图案~xd!@q6cp.O)。

I want to settle down soon and have a happy family of my own.
我想要很快安定下来而且有我自己的一个快乐的家庭IEoQG0yF+o]HUo0VAsV。

Education should teach us how to live, not to make a living.
教育应该教会我们如何生活，而不是教我们谋生的手段G8vJ11Yz3xrhX2sf。