I'm Mary Tillotson. And I'm Steve Ember with the VOA Special English program PEOPLE IN AMERICA. Today we finish telling about the life of Langston Hughes, known as the poet voice of African Americans. He was one of the most important writers of the Harlem Renaissance.
Langston Hughes was born in nineteen-oh-two. His parents separated when he was little. Langston grew up with his grandmother who told him stories about their family's fight against racial injustice. He developed a love of reading books as a way to deal with loneliness and a feeling of rejection from his parents. His love for reading grew into a desire to write.
As a young man, Langston traveled to Europe and Africa working on ships. He wrote poems and short stories during his travels. A few of the writings he sent home were published, which helped establish him as a professional writer.
By nineteen twenty-five, Langston Hughes had returned to the United States and was living in Harlem in New York City. This was during the Harlem Renaissance, a period of great artistic creativity among blacks who lived there.
Hughes discovered a new way of writing poetry, using the rhythms of jazz and blues to support his words. His first collection of poetry, called the "Weary Blues," was published in nineteen twenty-six. Hughes wrote poetry about the common experiences of black people. People said they could see themselves in the words of his poetry.
Hughes had worked many different jobs, but wished to make a living as a writer. Wealthy white supporters of the Harlem Renaissance helped Hughes until he could support himself. Critic Carl Van Vechten had helped to get the "The Weary Blues" published. Van Vechten was one of the first to recognize the new styles of the writers of the Harlem Renaissance and their importance in African American literature. Another supporter of the arts, Amy Spingarn, gave Hughes money to complete his education at Lincoln University in Pennsylvania.
Missus Charlotte Mason began supporting Hughes in nineteen twenty-seven. In nineteen thirty, he published a novel, "Not Without Laughter," that made him very famous. His relationship with Missus Mason ended about the time the book appeared. After that, Hughes sank into a period of intense personal unhappiness.
In the early nineteen thirties, Langston Hughes traveled to Cuba and Haiti. He later traveled across the southern United States, doing poetry readings and trying to sell his books. Hughes was likeable and gained many readers during his visit to the South.
He also began to write many different short stories that were published in magazines. In these, he was able to discuss ideas related to black pride, racism and other issues of black life.
In nineteen thirty-two, Hughes traveled to the Soviet Union. He became an active supporter of communism. He believed communism was fairer to minorities. During this time, his writing also became more militant. Several of his poems expressed support for social and political protests.
Later, his writings began to examine the unfairness of life in America. He wrote about people whose lives were affected by racism and sexual conflicts, violence in the southern United States, Harlem street life, poverty, racism, hunger and hopelessness.
Hughes wrote one of his most important works in nineteen twenty-six, "The Negro Artist and the Racial Mountain." It spoke of black writers and poets who want to be considered as poets, not black poets. Hughes thought this meant they wanted to write like white poets. He argued there was a need for race pride and artistic independence:
"We younger Negro artists who create now intend to express our individual dark-skinned selves without fear or shame. If white people are pleased we are glad. If they aren't, it doesn't matter. We know we are beautiful. And ugly too...If colored people are pleased we are glad. If they are not, their displeasure doesn't matter either. We build our temples for tomorrow, as strong as we know how. And we stand on top of the mountain, free within ourselves."
As his success as a writer grew, Langston Hughes began to explore other ways to spread his message. He wrote children's stories and several plays. By nineteen forty, he had opened black theater groups in Harlem, Chicago and Los Angeles.
While writing for a black newspaper, Hughes created someone called "Jesse B. Semple." The name "Jesse B. Semple" represented Hughes's writing style: Just Be Simple. Semple was a common man of the people who "tells it like it is." His experiences help other people understand the world in a clearer light. 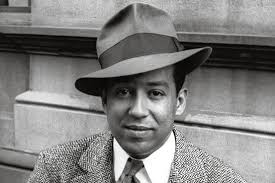 Langston Hughes was known to be very supportive of young writers and poets. Some said his willingness to help young writers was a result of his unhappy childhood. Wherever he went, from the Caribbean to Africa to Russia, he connected with writers and gave them support. He also translated some of their writings into English and included them in collections he produced.
Not everyone praised Hughes' work. Some critics said his writings were too simple and lacked depth. Some blacks condemned his informal writing style and honest descriptions of black life. They also criticized his use of blues and jazz in his poetry and his expressions of sympathy for working people.
However, his supporters praised his straightforward writing style. They said he demonstrated that writing does not have to be complex to be great.
In nineteen fifty-one, Hughes wrote one of his most successful collections of jazz poetry called, "Montage of a Dream Deferred." The poems are expressions of everyday life in Harlem. They take the reader through one complete day and night in Harlem.
In some of the poems, Hughes uses a new kind of jazz played in Harlem at the time, called "Be-Bop." The poems deal with the problem of being black in America.
There were difficult times for Langston Hughes. Conservatives in the United States were suspicious of his ties to extremist movements, his activism, and his support of the Soviet Union for its treatment of minorities. In nineteen-fifty-three, he was forced to appear before Senator Joseph McCarthy's committee on subversive activities to explain his interest in communism. Under pressure during the nineteen fifties, Hughes softened the voice of his poems and rejected his militant past. He was criticized later by some black activists for not being militant enough.
Hughes continued to write and publish throughout the nineteen fifties and sixties. And he won several important awards during that time. He also taught at Atlanta University and the University of Chicago.
Hughes died of cancer in nineteen sixty-seven in Harlem, New York. His home on One Hundred Twenty-Seventh Street has been made a national landmark.
Experts say Langston Hughes helped to change the sound of American literature. They say he wrote poems the world will always know.

By then she was established as a star.
那时她作为明星的地位已经确立1F6yaY589+XLAw。

If I can't make a living at painting, at least I can teach someone else to paint
如果我不能靠画画谋生，至少我可以教别人画画s@Q+3;s0ni@。

I was about to sink into the quicksand of sin
我就要陷入罪孽的深渊了s,V-=_e#kE2eB。

You've been so supportive of me and my dream for music.
你总是支持我和我的音乐梦想&P#Gx_v1Xv&。