The Princess on the Pea

There was once a prince.

He wanted a princess but it had to be a true princess! 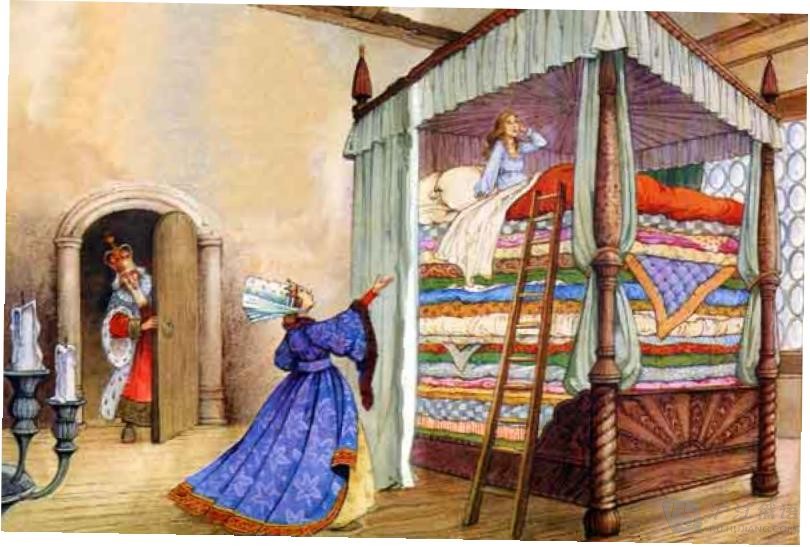 So he journeyed all around the world to find one,

but no matter where he went,something was wrong.

There was plenty of princesses,

but whether or not they were true princesses he couldn't find out.

There was always something that wasn't quite right.

So he came home again and was very sad,

for he wanted a true princess very much.

One evening there was a terrible storm.

It was really frightful!Then somebody knocked at the city gate,

and the old king went out to open it.

A princess was standing outside, but heavens,

how she looked from the rain and bad weather!

Water poured off her hair and clothes

and ran in at the toe of her shoe and out at the heel,

but she said she was a true princess!

but she didn't say anything.

She went into the bedroom,took off all the bedding,

and put a pea on the bottom of the bed.

and then put twenty eiderdown quilts on top of the mattresses.

There the princess was to sleep that night.

In the morning they asked her how she had slept.

Heaven knows what was in my bed!

I've been lying on something so hard that I'm black and blue all over!

It's simply dreadful Then they could tell that this was a true princess,

because through the twenty mattresses and the twenty eiderdown quilts

she had felt the pea

Only a true princess could have such delicate skin.

So the prince took her for his wife,for now he knew that he had a true princess,

and the pea was put into the museum,

where it can still be seen,if no one has taken it!