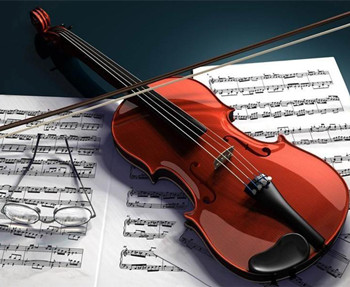 I remember the day Dad first lugged the heavy accordion up our front stoop,taxing his small frame. He gathered my mother and me in the living room and opened the case as if it were a treasure chest. "Here it is,"he said. "Once you learn to play, it'll stay with you for life."

If my thin smile didn't match his full-fledged grin, it was because I had prayed for a guitar or a piano. It was 1960, and I was glued to my AM radio,listening to Del Shannon and Chubby Checker. Accordions were nowhere in my hit parade. As Ilooked at the shiny white keys and cream-colored bellows, I could already hear my friends' squeeze box jokes.

For the next two weeks, the accordion was stored in the hall closet. Then one evening Dad announced that I would start lessons the following week. In disbelief I shot my eyes toward Mom for support. The firm set of her jaw told me I was out of luck.

Spending $300 for an accordion and $5 per lesson was out of character for my father. He was practical always-something he learned growing up on a Pennsylvania farm. Clothes, heat and sometimes even food were scarce.

Before I was born, he and my mother moved into her parents' two-story home in Jersey City, N.J. I grew up there on the second floor; my grandparents lived downstairs. Each weekday Dad made the three-hour commute to and from Long Island, where he was a supervisor in a comparty that serviced jet engines. Weekends, he tinkered in the cellar, turning scraps of plywood into a utility cabinet or fixing a broken toy with spare parts. Quiet andshy, he was never more comfortable than when at his workbench.

Only music carried Dad away from his world of tools and projects. On a Sunday drive, he turned the radio on immediately. At red lights, I'd notice his foot tapping in time. He seemed to hang on every note.

Still, I wasn't prepared when, rummaging in a closet, I found a case that looked to me like a tiny guitar's. Opening it, I saw the polished glow of a beautiffil violin. "It's your father's," Mom said. "His parents bought it for him. I guess he got too busy on the farm to ever learn to play it." I tried to imagine Dad's rough hands on this delicate instrument-and couldn't. .

Shortly after, my lessons began with Mr. Zelli at the Allegro Accordion School tucked between an old movie theater and a pizza parlor. On my first day, with straps straining my shoulder, I felt clumsy in every way. "How did he do?" my father asked when it was over. "Fine for the first lesson,"said Mr.ZeUi. Dad glowed with hope.

I was ordered to practice half an hour every day, and every day I tried to get out of it. My future seemed to be outside playing ball, not in the house mastering songs I would soon forget, but my parents hounded me to practice.

Gradually, to my surprise, I was able to string notes together and coordinate my hands to play simple songs. Often, after supper, my father would requesta tune or two. As he sat in his easy chair, I would fumble through "Lady of Spain" and "Beer Barrel Polka."

"Very nice, better than last week," he'd say. Then I would segue into a med-ley of his favorites, "Red River Valley" and "Home on the Range," and he would drift off to sleep, the newspaper folded on his lap. I took it as a compliment that he could relax under the spell of my playing.

One July evening I was giving an almost flawless rendition of "Come Back to Sorrento,"and my parents called me to an open window. An elderly neighbor, rarely seen outside her house, was leaning against our car humming dreamily to the tune. When I finished, she smiled broadly and called out, "I remember that song as a child in Italy. Beautiful, just beautiful."

Throughout the summer, Mr. Zelli's lessons grew more difficult. It took me a week and a half to master them now. All the while I could hear my buddies outside playing heated games of stickball. I'd also hear an occasional taunt: "Hey, where's your monkey and cup?

Such humiliation paled, though, beside the impending fall recital, I would have to play a solo on a local movie theater's stage. I wanted to skip the whole thing. Emotions boiled over in the car one Sunday afternoon.

"You have to," replied my father.

"Why?" I shouted. "Because you didn't get to play your violin when you were a kid? Why should I have to play this stupid instrument when you never had to play yours7"Dad pulled the car over and pointed at me.

"Because you can bring people joy. You can touch their hearts. That's a gift I won't let you throw away." He added softly, "Someday you'll have chance I never had: you'll play beautiful music for your family. And you understand why you've worked so hard."

I was speechless. I had rarely heard Dad speak with such feeling about anything, much less the accordion. From then on, I practiced without parents' making me.

The evening of the concert Mom wore glittery earrings and more makeup than I could remember. Dad got out of work early, put on a suit and tie, and slicked down his hair with Vitalis. They were an hour early, so we sat in the living room chatting nervously. I got the unspoken message that playing this one song was a dream come true for them.

At the theater nervousness overtook me as I realized how much I wanted to make my parents proud. Finally, it was my turn. I walked to the lone chairon stage and performed "Are You Lonesome Tonight?" without a mistake. The applause spilled out, with a few hands still clapping after others hadstopped. I was lightheaded, glad my ordeal was over.

After the concert Mom and Dad came backstage. The way they walked—heads high, faces flushed—I knew they were pleased. My mother gave me a big hug. Dad slipped an arm around me and held me close. "You were just great," he said. Then he shook my hand and was slow to let it go.

As the years went by, the accordion drifted to the background of my life. Dad asked me to play at family occasions, but the lessons stopped. When I went to college, the accordion stayed behind in the hall closet next to my father's violin.

A year after my graduation, my parents moved to a house in a nearby town. Dad, at 51, finally owned his own home. On moving day, I didn't have the heart to tell him he could dispose of the accordion, so I brought it to my own home and put it in the attic.

There it remained, a dusty memory until one afternoon several years later when my two children discovered it by accident. Scott thought it was secret treasure; Holly thought a ghost lived inside. They were both right.

When I opened the case, they laughed and said, "play it, play it." Reluctantly,I strapped on the accordion and played some simple songs. I was surprised! my skills hadn't rusted away. Soon the kids were dancing in circles and giggluig. Even my wife, Terri, was laughing and clapping to the beat. I wa samazed at their unbridled glee.

My father's words came back to me: "Someday you'll have the chance I never had. Then you'II understand."I finally knew what it meant to work hard and sacrifice for others. Dad had been right all along: the most precious gift is to touch the hearts of those you love.

Later I phoned Dad to let him know that, at long last, I understood. Fumbling for the right words, I thanked him for the legacy it took almost 30 years to discover. "You're welcome," he said, his voice choked with emotion.

Dad never learned to coax sweet sounds from his violin. Yet he was wrong to think he would never for his family. On that wonderful evening, as my wife and children laughed and danced, they heard my accordion. But it was my father's music.