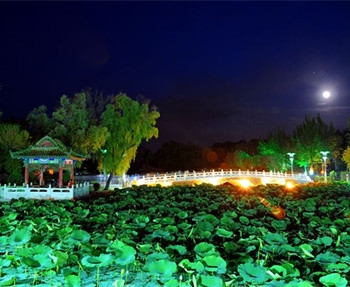 Moonlight over the Lotus Pond

It has been rather disquieting these days. Tonight, when I Was sitting in the yard enjoying the cool, it occurred to me that the Lotus Pond, which I pass by every day, must assume quite a different look in such moonlit night. A full moon was rising high in the sky; the laughter of children playing outside had died away; in the room, my wife was patting the son, Run-er, sleepily humming a cradle song. Shrugging on an overcoat, quietly, I made my way out, closing the door behind me.

Alongside the Lotus Pond runs a small cinder footpath. It is peaceful and secluded here, a place not frequented by pedestrians even in the daytime; now at night, it looks more solitary, in a lush, shady ambience of trees all around the pond. On the side where the path is, there are willows, interlaced with some others whose names I do not know. The foliage, which, in a moonless night, would loom somewhat frighteningly dark, looks very nice tonight, although the moonlight is not more than a thin, grayish veil.

I am on my own, strolling, hands behind my back. This bit of the universe seems in my possession now; and I myself seem to have been uplifted from my ordinary self into another world. I like a serene and peaceful life, as much as a busy and active one; I like being in solitude, as much as in company. As it is tonight, basking in a misty moonshine all by myself, I feel I am a free man, free to think of anything, or of nothing. All that one is obliged to do, or to say, in the daytime, can be very well cast aside now. That is the beauty of being alone. For the moment, just let me indulge in this profusion of moonlight and lotus fragrance.

All over this winding stretch of water, what meets the eye is a silken field of leaves, reaching rather high above the surface, like the skirts of dancing girls in all their grace. Here and there, layers of leaves are dotted with white lotus blossoms, some in demure bloom, others in shy bud, like scattering pearls, or twinkling stars, or beauties just out of the bath. A breeze stirs, sending over breaths of fragrance, like faint singing drifting from a distant building. At this moment, a tiny thrill shoots through the leaves and lilies, like, a streak of lightning, straight across the forest of lotuses. The leaves, which have been standing shoulder to shoulder, are caught shimmering in an emerald heave of the pond. Underneath, the exquisite water is covered from view, and none can tell its colour; yet the leaves on top project themselves all the more attractively.

The moon sheds her liquid light silently over the leaves and flowers, which, in the floating transparency of a bluish haze from the pond, look as if they had just been bathed in milk, or like a dream wrapped in a gauzy hood. Although it is a full moon, shining through a film of clouds, the light is not at its brightest; it is, however, just right for me a profound sleep is indispensable, yet a snatched doze also has a savour of its own. The moonlight is streaming down through the foliage, casting bushy shadows on the ground from high above, jagged and checkered, as grotesque as a party of spectres; whereas the benign figures of the drooping willows, here and there, look like paintings on the lotus leaves. The moonlight is not spread evenly over the pond, but rather in a harmonious rhythm of light and shade, like a famous melody played on a violin.

Around the pond, far and near, high and low, are trees. Most of them are willows. Only on the path side, can two or three gaps be seen through the heavy fringe, as if specially reserved for the moon. The shadowy shapes of the leafage at first sight seem diffused into a mass of mist, against which, however, the charm of those willow trees is still discernible. Over the trees appear some distant mountains, but merely in sketchy silhouette. Through the branches are also a couple of lamps, as listless as sleepy eyes. The most lively creatures here, for the moment, must he the cicadas in the trees and the frogs in the pond. But the liveliness is theirs, I have nothing.

Suddenly, something like lotus-gathering crosses my mind. It used to he celebrated as a folk festival in the South, probably dating very far hack in history, most popular in the period of Six Dynasties. We can pick up some outlines of this activity in the poetry. It was young girls who went gathering lotuses, in sampans and singing love songs. Needless to say, there were a great number of them doing the gathering, apart from those who were watching. It was a lively season, brimming with vitality, and romance. A brilliant description can be found in lotus Gathering written by the Yuan Emperor of the liang Dynasty:

So those charming youngsters row their sampans, heart buoyant with tacit love, pass on to each other cups of wine while their bird-shaped prows drift around. From time to time their oars are caught in dangling algae, and duckweed flow apart the moment their boats are about to move on. Their slender figures, girdled with plain silk, tread watchfully on board. This is the time when spring is grating into summer, the leaves a tender green and the flowers blooming - among which the girls are giggling when evading an out-reaching stem, their skirts tucked in for fear that the sampan might tilt.

That is a glimpse of those merrymaking scenes. It must have been fascinating: but unfortunately we have long been denied such a delight.

Then I recall those lines in Ballad of Xizhou Island:

Gathering the lotus, I am in the South Pond, / The lilies in autumn reach over my head; / Lowering my head I toy with the lotus seeds. / Look, they are as fresh as the waster underneath.If there were somebody gathering lotuses tonight, she could tell that the lilies here are high enough to "reach over her head"; but, one would certainly miss the sight of the water. So my memories drift back to the South after all.

Deep in my thoughts, I looked up, just to find myself at the door of my own house. Gently I pushed the door open and walked in. Not a sound inside, my wife had been fast asleep for quite a while.