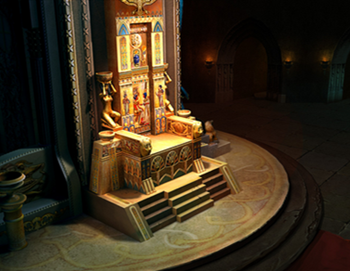 If I Were King

Recently in a movie magazine I came across the title of a film: If I Were King. It has put me in mind of something entirely foreign to the film in question. I wonder what would become of this world if I myself were king. This is of course a ridiculous fancy, for being a king is the last thing I aspire to and also a thing I utterly despise. What the hell is a king? How can I still be so feudalistic in my mind? Moreover, if one is really bent on being a king, he will try to carry out his design by deeds instead of by words. But, to put it hypothetically, suppose I were king, what would this world look like?

If I were king, my wife would of course be queen. With all her moral excellence, of which I make no doubt, she would be more than qualified for being a queen. But even if she had no virtue to speak of, or were just a whore, she would be queen all the same. Imagine how noble and dignified a queen would be and how people would keep lauding her to the skies like mad! It is indeed great fun for me to visualize all of this.

If I were king, my daughters would be princesses, and my relatives by marriage would all become members of the royal family. No matter how ugly and perverse or whatnot they were, people would keep lauding them to the skies like mad just the same because they were dignitaries.

If I were king, I would be addressed as "Your Majesty" and every word of mine would become a "royal edict". All my subjects would leave no stone unturned to carry out every will, every avaricious desire and even every whim of mine, even though they were beyond the possible. I would do no wrong simply because no one dared to call it a wrong. I would commit no crime simply because no one dared to call it a crime. No one would dare to berate or find fault with me unless I was removed from the throne, which meant that I was no longer the king. I would see all people hang their heads, bow low or prostrate themselves at my feet, including my respected elders, teachers, friends and even those who had used to swagger arrogantly in front of me. I could see none of their faces; all I could see were the tops of their heads or the hats or helmets on their heads. The only faces I could see would be ingratiating or supplicating—faces that dared not smile to express joy; faces that dared not refrain from a forced smile when there was no joy at all to justify a smile; faces that dared not to cry to express sorrow; faces that dared not refrain from a feigned cry when there was no sorrow to justify a cry. I could hear no true voices of my people. All I could hear would be the feeble, soft, timid and affected voice, like that of female Peking opera singer, chanting, "Long live the King!" That would be their language in toto. "Great is the King, our enlightened lord!" That would be the sole content of their language. There would be no one above me or on an equal footing with me. I would even feel bored, lonely and isolated.

Why would people behave like that? Why would they flatter my wife, my children and my relatives? Because I was king, their master. It would suddenly dawn on me that living among these flunkeys, including my esteemed elders, teachers and friends, I myself, too, was nothing but a mere head flunkey.

I am the citizen of the Republic. Being accustomed to the mode of thinking and living of a republican citizen, I would deeply abhor all servility and flunkeys, including my esteemed elders, teachers and friends. Dear scientists, please don't laugh at me. Methinks the world is very much in need of reform simply because of the presence of these flunkeys. I would regard it as the deepest disgrace and sorrow of my life to live among the flunkeys and become their chief. I would rather become a tyrant or an enlightened king so that I could kill off all my subjects, among them my respected elders, teachers and friends, and have the flunkeys species exterminated once for all. Then, with all my subjects gone, I would no longer be the king of flunkeys.

If I were king and ultimately ended up becoming no king at all, I would indeed be the greatest king that had ever breathed since time immemorial. I would join true people all the world over in giving three cheers for myself.