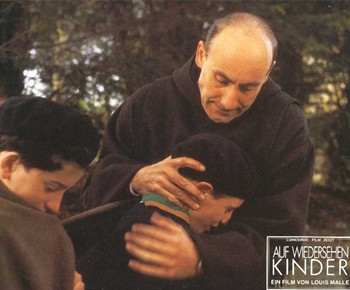 In the Pursuit of a Haunting and Timeless Truth

Louis Malle's Au Revoir les Enfants" (or "Goodbye, Children") is set in Occupied France in 1944, when Malle was an eleven-year-old at a Catholic boys' boarding school near Fontainebleau that sheltered several Jewish boys. The Gestapo learned they were there, and sent the ones they found to Auschwitz , and the headmaster to a work camp c4J One of the Jewish boyswas in Malle's class, but Malle didn't get to know him well and didn't realizethat he was Jewish. For the dramatic purposes of the movie, he has conceived a close friendship between his alter ego, the fairhaired Julien Quentin(Gaspard Manesse), and the dark boy who is using the false name Jean Bonnet (Raphael Fejto). Malle has every right to fantasize and invent, but I'm puzzled by the kind of fantasizing he does here. The First half of the film is so hushed and enervated that I kept peering into the schoolyard looking for signs of life. It's full of wealthy boys at play; they're even there on stilts,battling and falling down. But their games-which might clue us in totheir ruling-class assumptions and their snobbery and the limits of their understanding-are shown at a distance. The camera is so discreet it always seems about ten feet too far away, and the boy who plays Julien is directed so that he never engages us; we can't look into him, or into anyone else.

As the story is presented, Julien, who is quick, grasps almost at once that this new boy, Jean Bonnet, is an impostor, who isn't really Catholic; Julien catches Jean standing by his bed at night, praying silently, with two lighted candles, and Julien rummages in Jean's books and discovers that his realname is the German-sounding Jean Kippelstein. Julien is the only boy in the class who offers Jean friendship; the others play tricks on Jean and gang upon him, because he's different-he's not one of them. Julien, who knows how different Jean actually is, keeps his discovery to himself. He and Jeanare the two brightest boys in the class; they both love to read, and they become best friends. This is a rather moist fantasy of Julien's virtue; it's eventually mixed with a fantasy self-accusation of guilt. When the Gestapo chief comes into the classroom asking for Jean Kippelstein, the scared, nervous Julien involuntarily turns and looks at his friend-it's a Judas kiss ,but an unintentional one. And Jean exonerates him: when he is packing his gear to go with the Gestapo men, he tells Julien that it didn't matter, that the Nazis would have caught him anyway.

In the finest scene of the movie, Jean shakes hands with the boys near him just before he's taken away; it's a well-brought-up young boy's leavetaking,and nothing has prepared you for it. But throughout Lrean is used as an aesthetic objea-spiritual, sensitive, foreign . He's often shot in profile, with his lips parted, and in one scene he goes to Mass with the other boys and tilts his face, open-mouthed-almost yearning-to receive the holy wafer, whichm is denied him by the Reverend Father, the headmaster. Is the boy merely seeking acceptance by the other boys-is he just trying to pass as one of them-or is something else implied? The whole movie seems padded and muted, it's designed to make you understand that Julien is stricken by the horror of what happens to his friend. But nothing in it comes into clear focus-not the boys' attitudes, not even the images (and certainly not a lengthy sequence in which the two boys are on a treasure hunt in Fontainebleau Forest).

Malle has said that this is the most personal and important film of his career,and I believe that he thinks that. I also believe that he's wrong. If "Au Revoir"is very personal to him, this may be because as an adult he has felt stricken by the recognition that he wasn't stricken then, and it may involve his feelings of guilt over his own family's safety and prosperity-everything that the film barely touches on.

Malle has said of "Au Revoir." "I reinvented the past in the pursuit of a haunting and timeless truth." Maybe that's why I felt as if I were watching a faded French classic, something I dimly recalled. In pursuit of haunting and timeless truth, Malle has gone back to the anti-Nazi movies of the forties,and polished and formalized the actions until he's turned melodrama into polite reverie.

Yes, it gets to you by the end. How could it not? But you may feel pretty wom down-by how accomplished it is, and by all the aching, tender shots of Jean. He's photographed as if he were a piece of religious art: Christ in his early adolesence. There's something unseemly about the movie's obsession with his exotic beauty-as if the French-German Jews had come from the far side of the moon. And does he have to be so brilliant, and a gifted pianist, and courageous? Would the audience not mourn him if he were just an average schmucky kid with pimples?