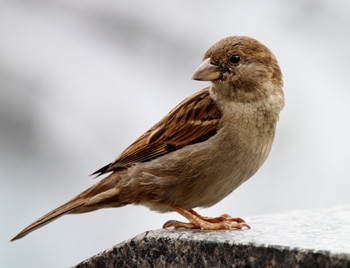 As soon as the rain stopped, a little sparrow, almost full-fledged, flew into the courtyard. It hopped, fluttered, darting up to the edge of flower pots and back to the ground again. Watching it move up and down a couple of times, I realized drat it could not fly any higher as the plumes on its left wing had got twisted with one sticking out as if about to come off. When I made an attempt to move closer, it jumped off a hit and stopped again, staring back at me with its small, black and bean-like eyes that had a mixed look of wanting to be friends with me and not being certain that I was trustworthy. It occurred to me that this must be a tame bird, having been caged since it was hatched perhaps. No wonder it was not much scared of my presence. Its left wing might have been impaired by some kid and that was why there was distrust in its look though it showed some intimacy with man. Suddenly I was seized with sadness. How miserable it was for a bird to lose its wings！ Without someone taking care of it this small thing could not survive. But man had injured its wing. How cruel he was！ Injured as it was, it still wanted to rely on man. How pitiable！ The look in its eyes showed that She little creature was of two minds. It was small and by no means pretty, yet its gestures and expressions revealed that it had been wronged and landed in a difficult situation. It was anxious to keep its delicate life out of danger, but it did not know what to do. It had little confidence in itself and less trust in man, but it needed someone to rely on. It hopped and stopped, looking at me but too shy to come over. I thought of fetching some cooked rice to attract it, but I dared not leave it alone test it should be attacked by the kitten. As the kitten was not around at the moment, I hurried to the kitchen and cause back with a few grains only to find the bind missing. I ran to the outer yard and saw the kitten crouching by a flower pot in front of the screen wall. I hastened to drive her away but, with a quick jump, she caught hold of the bird. The tame sparrow, with its tail and claws dangling from the kitten’s mouth, did not even know how to struggle. It looked more dead than alive.

With my eyes fixed on the bird, I watched the kitten run first to the kitchen and then to the ram at the west end. I was afraid to press hard after her, but I had to follow her in case she should tighten her jaws. Though the bird's head was not visible to toe, the look of anticipated danger in its eyes was vivid in my wind. Between its look and my sympathy stood that small white cat. Having run a few rounds after her I quit, thinking it was pointless to chase her like that because, by the time I caught her, the bird would have been half dead. When the cat slipped back to the kitchen again, I hesitated for a second and then hurried over there too. It seemed, in my mind's eye, the little bird were pleading for help with its two black bean-like eyes.

In the kitchen I noticed the cat was crouching by a tin pipe which was installed as smoke duct in winter and dismantled in spring, at the corner, but the bird was not with her. The pipe leaned against the corner and, between its lower end and the floor; there was an opening through which the cat was probing with her paws. My hope revived: the bird was not dead. As the kitten was less than four months old, it had not teamed how to catch mice, or how to kill for that matter. It was merely holding the bird in its mouth and having fun with it. While I was thinking along these lines the little bird suddenly emerged and the kitten, taken aback, bolted backward. Tile way the little bird looked was so registered to me at the first glance that I felt like shutting my eyes immediately. It was virtually crouching, with its chest close to the floor, like a man suffering from a stomachache. There was no stain of blood on its body, but it seemed to be shrinking up into itself. Its head dropped low, its small beak pointing to the floor. Its two black eyes, unseeing, were very black and large, looking last- The little life left in it was al in the eyes. It seemed to be expecting the cat to charge again, with no strength to resist or run; or wishing that the cat would be kind enough to pardon it or that some saviour would come along to its rescue. Life and death coexisted in its eyes. I thought the bin must be confused or stunned, or else why should it have come out from the pipe? Stunned as it was, it still cherished some hope which, though hard to define, was the source of life. With that hope it gazed at the floor, expecting either to survive or die. I was so really scared that it became completely motionless, leaving itself all to the precarious hope. It kept quiet and still as if waiting for its life to flow out of its eyes.

The kitten made no more attempts to attack it. She only tried to touch it with her little paws. As the kitten touched it, it tilted from side to side, its head undisturbed and its eyes looking blank at the floor. It would not fight back so long as there was a chance of survival. But the bird had not lost all of its courage; it acted this way only with the cat. I went aver light-footed, picked up the cat and put her outside the door, the sparrow remaining where it was. When I took it up in my hands and looked, it was riot seriously injured, though some fluff had come off its chest. It was looking at me.

I had no idea what to do. If I let it go, it was sure to die; if I kept it with me, I did rot have a cage for it. I held it in my hands as if holding all the lives in the world, not knowing what to do. 'Me sparrow huddled up, motionless, its eyes as black as ever, still expectant. It remained that way for a long while. I took it to my bedroom, put it on the desk and watched it for a few moments. Suddenly it tilted its head Wit and then right, winking its black eyes once or twice, and became still again. By now its body seemed to have stretched a hit, but it still kept its head low as if it had understand something.