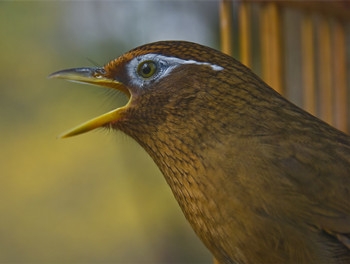 The other day when I went into Riverside Park, I was greeted by the chirrup of a song thrush from a grove. Walking towards the sound I saw the thrush hopping about in a flower bed. I looked carefully trying to spot a tiny piece of string that should have been fastened to its leg, but in vain. Ah, it must have escaped from its cage. It was a free bird! One moment it jumped onto a rose spray and sang with its head high, the next it plunged into the grass and looked at me with its tail waving up and down. Its proud and self-satisfied manner was really enchanting.

Not far from the bird on the grass was a bird cage. It was made of painted bamboo strips and looked neat and clean. On top of the cage stood a big gleaming metal hook. From the cage-door hung a fiery red tassel, which added to the magnificence of the cage. As birdhouses go, this was certainly a luxurious residence.

An old man was dozing under a nearby hibiscus tree. He seemed to be the owner of the cage. Hearing my approaching steps he opened his eyes. I began the dialogue.

"Hello. You bird has got out."

The old man cast a glance at me and gave an uncaring smile. "Fly away? But why should it? It can't leave the food bowl."

Examining the bowl carefully, I found nothing special about it. It was no more than a small fine china bowl with a plum design on the side. The bird food in it was some yellow grains which gave off the refreshing smell of wild grass. I thought it must be a mixture of soaked millet and the yolk of boiled eggs, perhaps with some condiments added to it. There was nothing special about it.

I told the old man what was on my mind, but he just shook his head and smiled at me without saying a word. I knew better than to keep on inquiring, for each has his own tricks in raising birds and such secrets must never be given away.

Just at that moment I saw the carefree bird walk into the cage at a leisurely pace. Seeing that his bird was re-encaged, the old man slid down the cage-door with a click. Standing on the rim of the bowl complacently, the thrush had already begun to peck at its food. As I left the park, I turned over in my mind a recurring question—what was the magic in the food that had made this beautiful bird sing so happily but forget about its wings?