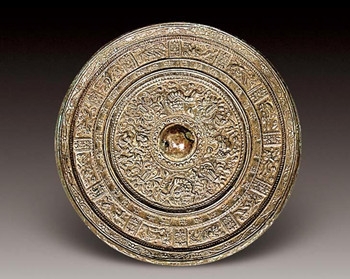 Whenever we visit a museum, we see various types of ancient bronze mirrors. Used as a household necessity for dressing by the ancient Chinese people, these bronze mirrors were mostly unearthed from ancient tombs, while some are kept as heirlooms.

Our ancestors started to use bronze mirrors in as early as the 11th century B.C. During the Warring States Period, bronze mirrors prevailed among the populace. The front side of the mirrors, after being polished, glistens while the backside is embellished with single-layered or double-layered patterns, among which the commonly seen are thus- of animal faces, flowers and leaves, dragons and phoenixes. During the Western flan Period, the bronze mirrors used to be relatively thick and heavy. Most of the decorative patterns were of geometrical forms, supernatural figures, or fowls and animals, accompanied by inscriptions of only three or four characters with such meanings as "eternal love", "never to forget", "wealth for ever" and "everlasting happiness". The content frequently dealt with common well-wishings. During the Song and Yuan Dynasties the bronze mirrors appeared in all shapes: round, rectangular, rhomboidal, octagonal, and those with a handle. Since the Qing Dynasty, however, the bronze mirror has gradually given way to the glass mirror.

In Shanghai Museum, one finds a treasure of the Western Han Period, the "penetrative bronze mirror", measuring 11.5 cm. in diameter. Like ordinary bronze mirrors it bears patterns and inscriptions on the back. But what amazes people is that when a bundle of rays is projected onto the surface of the mirror, which, in turn, reflects the light on the wall, the patterns and inscriptions on the backside are shown in the ring of the light, as if they had penetrated the whole thickness of the mirror. Hence the name of the mirror. For a long time in the past, even scientists were so puzzled at the phenomenon that it was called a "magic mirror". Today, reproductions of this mirror are being made and sold as souvenirs and they appeal very much to tourists.