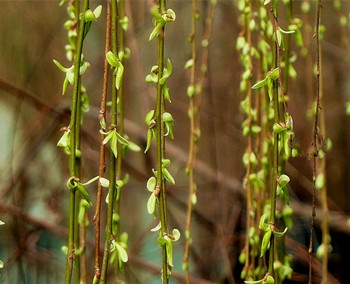 An Offering from His Sweet Homeland

Returning from a visit to his hometown, he walked slowly alorig the streetina chilly drizzling rain, a travelling bag in his left hand, and in his right handa half-filled glass water bottle with a bunch of green tender willow twigs stuck in it. A light wind touching his face called for painful memories of the past...

Those were the days when Father and Mother went deep-ploughing in the fields. They were told that when the earth was ploughed five feet deep, the grain yield per mu would reach ten thousand jin. Simply digging one foot down would amount to two thousand jin of grain! Busy with such a "highly profitable" significant job, they could come back home only once in more than ten days. The task of taking care of him thus fell upon the limp shoul-ders of his 14-year-old sister.

His stomach was aching as if catching fire; he rolled back and forth on the kang crying out loud, "I am so hungry. I can't sleep!"

His sister who lay beside him sat up at once. Resting him on her legs, shesang to him soffly:

It was broad daylight when he woke up to find himself alone on the matlesskang. He screamed with fear, "Mum! Sister-"

"Little Brother, I am here. Come over here quickly!"Following the voice of his sister, he ran out of the room, his feet and bottom all bare. It was under the big willow tree in the middle of the courtyard that he found his sister standing on her toes on the top end of a door-propping stick being leaned against the tree. Her left hand seized hold of a branch while her right hand was stretching for a cluster of twigs prospering with buds. But she was too small to reach them. Then she suddenly jumped up in an attempt to get at them. Before he realized what had happened, she fell on the ground, but with a firm grip of those twigs in her hand.

"Sister-"he threw himself upon her. Slowly she opened her eyes and smiledat him, when he spotted a bleeding cut above her right eye-corner. At the foot of the wall, he swiffly collected a pinch of very fine dust and sprinkled it on the cut. It stopped bleeding. Sister propped herself up with both hands. She carefully stripped all the buds off the willow twigs and put them in an earthen pot filled with clean water. Then she kept squashing and rubbing them between her fingers; soon the water was dyed a thick emerald green. She replaced it with another pot of clean water and repeated her action untilthe water no longer changed its color. Scooping up the buds and kneading them into a ball no bigger than a fist, she handed it to him.

"Aha, my good brother. Now eat it and your stomach will not make any noise again."

He grabbed it and gobbled it up. It even tasted somewhat sweet mingled with a slight bitterness.

The deep-ploughing battle was still on when Sister fellill. Initially, she felt apain on her neck; then reddish thick veins popped out along her neck, with ulcers oozing thick yellow mucus.

That morning saw an ancient one-wheeled pushcart, with both his sister andhim sitting on it, rolling along the yolk-yellow winding path stretching awayfrom the end of the village. At noon time, they arrived at the biggest hospitalin town. Who would have thought that all the doctors were away to partici-pate in the "central tasks" of the time! The young nurse on duty had never seen such a case before. The cart rolled back following the same route it came in the moming.

Then some local medical men were called in. They performed an operation on Sister's neck with a dazzling knife without using anesthetic. She refused to cry, only uttering a groan at the most unbearable moment, her hand clutch-ing his arm, her nails digging into his flesh. The men left after a big dinner, but they did not take away Sister's disease.

He stayed close by to look after her, bringing in drinking water and carrying away the bedpan. Nevertheless, she was getting weaker and weaker, so feeble that she even had to stop several times to gasp for breath when drinking a small bowl of water. She wanted to sleep, but the pain in the neck was too gnawing to let her close her eyes.

One day, she motioned him to come over and held his hand"

When...people die, do...they...eat?" she asked half-consciously,it was hardto tell whether she was asking him or herself.

He did not nod, nor did he shake his head, his eyes wide opert staring aroundvacantly.

Suddenly, her spirit seemed to come back to her: her eyes shone, her cheeks flushed, and she no longer panted when she spoke. She's getting better now,he thought.

He was still motionless, but upon hearing the word "eat," he answered, "Hawillow buds. I'll pick up a lot of willow buds for you.

"Her brows smoothed, and, with a smile that could hardly be deteaed, sheslowly loosened her hand. Her eyes still watched him, but lacked their usualluster.

She was gone; she left forever satisfied with a word of comfort uttered unin-tentionally by her little brother. Though he was young at the time, he did not forget his promise. He put afew withered willow leaves on Sister's lips.

As time advanced, he was old enough to be able to carry a bucket and to usea shovel. He planted a small willow tree on his sister's grave and came al-most every day to see it and to take care of it. Before long, he went to school.

Gazing upon the willow twigs in the bottle, he poured out his heart silently to his sister:

"My dear sister, your dearly beloved little brother is now a P.L.A. regimen-tal officer. I went to your grave again when I returned to our village recentlyto see our parents. This is a bunch of branches Ipicked up from that willowtree. I'II take it as your picture, as your statue, and place it as an offering toyou on my desk. "Dear Sister, our parents are now over 70, in fairly good health for their age. Mother said to me, 'It's a pity that your sister did not drag through thosehard years. See what we eat today? We even feed the chickens with goldencorn flour, not to mention willow buds..."

Ahead of him was his house. As his feet carefully probed the uneven srufaceof the road, his mind kept pondering on that part of history, a tortuous paththey had gone by. He could not help feeling grief, even with an awarenessthat history never foUowed a straight forward course...