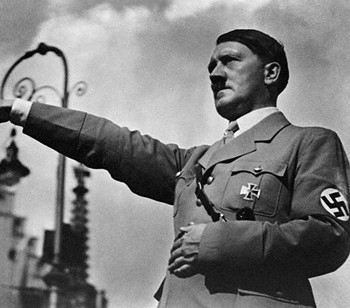 Suddenly the war was over, and Hitler was captured and brought to Amsterdam. A military tribunal condemned him to death. But how should he die? To shoot or hang him seemed too quick, too merciful. Then someone uttered what was in everybody’s mind: the man who had caused such incredible suffering should be burned to death.

“But,” objected one judge, “our biggest public square in Amsterdam holds only 10,000 people, and 7,000,000 Dutch men, women and children will want to be there to curse him during his dying moments.”

Then another judge had an idea. Hitler should be burned at the stake, but the wood was to be ignited by the explosion of a handful of gunpowder set off by a long fuse which should start in Rotterdam and follow the main road to Amsterdam by way of Delft, The Hague, Leiden and Haarlem. Thus millions of people crowding the wide avenues which connect those cities could watch the fuse burn its way northward to Herr Hitler’s funeral pyre.

A plebiscite was taken as to whether this was a fitting punishment. There were 4,981,076 yeas and one nay. The nay was voted by a man who preferred that Hitler be pulled to pieces by four horses.

At last the great day came. The ceremony commenced at four o’clock on a June morning. The mother of three sons who had been shot by the Nazis for an act of sabotage they did not commit set fire to the fuse while a choir sang a solemn hymn of gratitude. Then the people burst forth into a shout of triumph.

The spark slowly made its way from Rotterdam to Delft, and on toward the great square in Amsterdam. People had come from every part of the country. Special seats had been provided for the aged and the lame and the relatives of murdered hostages.

Hitler, clad in a long yellow shirt, had been chained to the stake. He preserved a stoical silence until a little boy climbed upon the pile of wood surrounding the former Fuhrer and placed there a placard which read, “This is the world’s greatest murderer.” This so aggravated Hitler’s pent-up feelings that he burst forth into one of his old harangues.

The crowd gaped, for it was a grotesque sight to see this little man ranting away just as if he were addressing his followers. Then a terrific howl of derision silenced him.

Now came the great moment of the day. About three o’clock in the afternoon the spark reached the outskirts of Amsterdam. Suddenly there was a roll of drums. Then, with an emotion such as they had never experienced before, the people sang the Wilhelmus, the national anthem. Hitler, now ashen-gray, futilely strained at his chains.

When the Wilhelmus came to an end the spark was only a few feet from the gunpowder; five more minutes and Hitler would die a horrible death. The crowd broke forth in a shout of hate. A minute went by. Another minute. Silence returned. Now the fuse had only a few inches to go. And at that moment the incredible happened.

A wizened little man wriggled through the line of soldiers standing guard. Everybody knew who he was. Two of his sons had been machine-gunned to death by parachute troops; his wife and three daughters had perished in Rotterdam’s holocaust. Since then, the poor fellow had seemed deprived of reason, wandering aimlessly about and supported by public charity—an object of universal pity.

But what he did now made the crowd turn white with anger. For he deliberately stamped upon the fuse and put it out.

“Kill him! Kill him!” the mob shouted. But the old man quietly faced the menacing populace. Slowly he lifted both arms toward heaven. Then in a voice charged with fury, he said:

“Now let us do it all over again!”