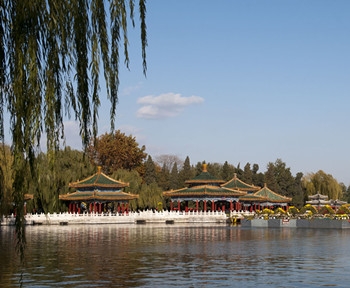 When my legs were first paralyzed, my temper became terrible. Looking at the lines of wild geese flying back north, I would suddenly smash the window pane in front of me. Listening to the sweet songs sung by the famous singer Li Guyi, I would throw whatever happened to be on hand at the wall. On these occasions Mother would steal out quietly, watching me from a place where I could not see her. When I calmed down, she would come back softly and gaze at me with sad eyes.

“They say that the flowers in Beihai Park are in bloom now. Let me wheel you there,” she used to say. Mother loved flowers dearly, but ever since my legs became paralyzed, all her flowers had died.

“No, I won’t go!” I shouted, while beating my cursed legs as hard as I could. “What am I still living for?” Mother would then rush up to me, holding my hands in hers and saying between subdued sobs, “The two of us should live together happily, happily…”

Although I did not know it, she had been seriously ill herself all the time. It was my younger sister who told me later that mother had often been kept awake the whole night with pains in the liver.

One day I was alone in the room, watching the rustling fall of autumn leaves through the window when Mother came in. She stood between me and the window and said, “The chrysanthemums in Beihai are blossoming. Do let me take you there for a visit.” Her sad eyes in her haggard face silently implored me. “When?” I asked.“Tomorrow, if it suits you,” she replied, pleasantly surprised at my interest.“Okay, tomorrow then,” I agreed. She was so delighted that she did not know whether to sit or to stand.“Let’s get ready right now,” she suggested. “Oh, what a bore! Do we need to get ready for a park just a few steps away?”I said. She burst out laughing herself, sat down beside me and murmured, “After we’ve seen the chrysanthemums, we’ll dine at Fang Shan Restaurant. You used to love their puree of peas best when you were a little boy. Still remember our last tour to Beihai? You insisted that the poplar flowers be worms and ran to stamp on them one by one…” Here she broke off abruptly, more sensitive to words like “run” than I ever was. She went out again gently.

Yes, she went out, never to come back.

When the neighbors carried her onto the tricycle flatcart, she was still vomiting mouthfuls of blood. I had never thought she could have been so seriously ill. Watching the three-wheeler go, I had not expected it would be her departure to eternity.

The young man next door carried me on his back to the hospital to see her. She was gasping her last, in just the same way as she had lived her entire hard life. I was told later that her last words before passing away were: “I have an invalid son and an unmarried daughter…”

It was another autumn when my sister wheeled me to Beihai park to see the chrysanthemums. The yellow ones were simple and elegant; the white ones, pure and noble; and the purple ones, warm and deep; all were in full bloom, dancing in the autumn breeze. I came to know what mother hadn’t had time to finish, and so did my sister. We should live together happily…