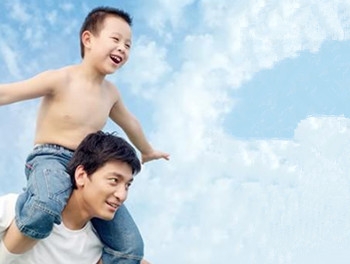 My neighbor Lao Ji was well informed. Every day when he got off work, he would bring several pieces of news from big events at home and abroad down to Small strifes between husband and wife, or between mother-in-law and daughter-in-law. The tune far his news broadcast was usually dinner time, so the best place for it was naturally the shared kitchen.

One day, Lao Ji carte into the kitchen and said, "Lao Wang, haven't you heard the news?" "What?" "So-and-so's son has been arrested." "Oh? Why?" I asked in surprise, putting down the knife. "No doubt for an offense against the law.

The boy was quite a darling as a child. It was all his parents' fault." Lao Ji went on while washing rice. "He has been spoilt from childhood, you know. If the boy wanted a star, his parents would not dare to give him the moon. You see, if a child is not brought up properly from infancy, you cannot expect him to grow up in the right way, can you? Bad habits such as swearing, fighting, smoking and drinking are the consequences."

What he said was indeed right and proper and I kept nodding in agreement while secretly sympathizing with spend-so. If he had heard Lao Ji's lecture, he wouldn't have committed such a grave mistake.

Lao Ji had finished washing the rice and was preparing to cut the vegetables when he suddenly stopped short with an exclamation of “Oh!” I turned to am something scrawled in chalk on the hack of his cutting hoard. Lao Ji recognized his six-year-old son's drawing at one glance. He then smiled, "'that kid must have learnt this from a film he saw. It was a restricted film, not open to the public. “He stared at the picture for a while before slowly cleaning it off. Just then his son, Xiao Guang, rushed in with a long spear in hand. Seeing that his "masterpiece" was cleaned off, he flared up. "Why did you clean off my picture? What a beastly dad you are!" he tired, pointing his spear at Lao Ji.

In desperation, Lao Ji took up the pot lid for self defense. He was begging his son, "Please, don't! There is a dear! Listen to your dad. Dad is preparing dinner far you. How can I cut vegetables without cleaning the drawing off? You can draw on it after I have done the cutting, can't you?"

This suggestion made Xiao Guang put his spear away, for he liked the idea as most boys did. Hardly had the battle between the sons spear and father's shield ended when an "armistick tale" began. When Xiao Guang demanded to ride the horse right then, Lao Ji replied. "I'm now preparing dinner. I'll let you ride on me to your heart's content after dinner. Is that okay? If I don't keep my word, I'll be damned!" But Xiao Guang wouldn't budge an inch. Lao Ji wrung his hands in the air out of desperation and started to think of a new idea. "Oh, yes! I've just bought a bar of chocolate. Run and get it right now, or Mum will eat it all!" "I don't want chocolate! I want to ride a horse..!"

The quarrel came to a stalemate, and Lao Ji was at his wit's end when his wife came to make peace. "Look at you, dear! So childish! What does it matter if we have dinner a bit later than usual?

Her words were like a whistle of a referee that settled the dispute immediately. Lao Ji instantly went back to his room to carry out his duty as an "obedient horse.”