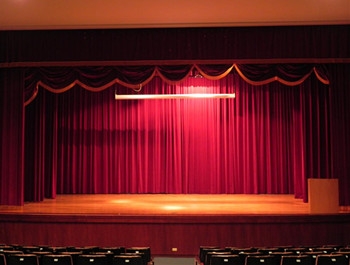 "I've just moved 'the trouser legs' a little. What of it?"

I didn't know which of his nerves told this blind actor that I was stealthily moving the side curtains. My habit of calling the side curtains "trouser legs" irritated him to such an extent that his artificial whiskers quivered. I was sure that under the make-up his face must be black with anger.

He deserved the position of art adviser in the troupe for the long years he had been working there. What a comfortably easy job it would have been for him! But ire claimed an artist should remain on the stage till death. So I was appointed by the director to see to his safety whenever he went on stage.

No one could say when the side curtains on the stage came to be called the "trouser leg." In fact, some actors would use them as napkins after snacks, and others would lift them to take a short cut off the stage. All this he could no longer see. I had held u the side curtain just in time to keels him from tripping over it, and this was what I got in return from him." It serves you right if you stumbled on it!" I cursed to myself.

With tears brimming in his sightless yet still attractive eyes, he angrily demanded to know who nicknamed the sacred side curtains "trouser legs."

This incident occurred during the Cultural Revolution when he still had his eyesight. At the door of the theater hung a couplet which read: "A small temple with strong evil wind; A shallow pond with many bad tortoises." Between the vertical couplet stretched the horizontal streamer which read: "Away with old scoundrels." At that time only a few young actors were allowed to perform on the stage. It was almost impossible for them to give any good performances. So this veteran actor was soon "liberated" under the pretest of "implementing the policies" and was made stage manager with the concurrent job of playing silent minor roles on the stage. However, this job which kept him free lasted no more than a month. It was ail because of "the trouser legs" incident. Some leading actors used to hold up one of the side curtains to strike a pose when going on the stage and hold it up again to show off when leaving the stage. When he saw such behavior he forgot the directive of "remoulding in real earnest' and roared with indignation at these actors. A public meeting wits held on the spot by the rebels to severely denounce this "ox" who wanted to "overturn heaven.”

"Down with the filial son of Stanislavsky!"

Then suddenly one of the old actor's favorite students flung out the article, On the Integrity of Stage An, which the old actor had written in secret when he was confined in the "ox shed". This set the whole audience boiling as if salt had been poured into a pot of hot oil.

"He even dared to write reactionary articles in the 'ox shed' to poison people's minds!"

Viciously they tore up all the streets of his article and scattered the pieces swirling around the old actor's feet. Bending his head, he watched the words on the scraps of paper becoming fainter and fainter until he could see no mare because of a relapse of glaucoma.

The old veteran then told me as if in apology that he couldn't bear to see art maltreated. Fumbling on the table, he took up a carved bronze-colored photo frame containing a stage photo of himself as a Veteran worker.

He said to me, "A complete work of art should include the frame as well. The side curtains are a part of the stage frame. If we treat them as 'trouser legs' and abuse them at will, how can we actors deserve to be referred to as 'the engineers of the human soul'?"

How I wished he could see again! He would see my regretful tears. Yes, he did see all too clearly, for he abruptly broke off.