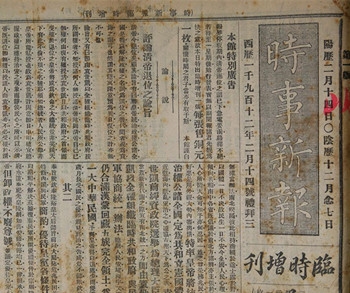 In March I heard from Mr. Liu Xunyu that Husheng was sick and hopelessly sick at that. The doctor said there was nothing he could do but to trait for the day to arrive. Toward the end of April, I came across an obituary issued by Lida Association in the newspaper Current Affairs. How quickly the day had arrived! Later, when I learned how he had suffered during his illness, I thought it was too miserable. From his point of view, however, his passing away was not a bad thing after all, because he suffered less by going earlier. But it must have been very hard for him to close his eyes and resign himself to the fact that he was leaving his Lida School, his friends and his students behind.

What wag most memorable about Husheng was his attitude toward life. He was as strong as a man of steel, his dark complexion set off by clothes of coarse cloth, looking like someone from the countryside. He could withstand any hardship and never sought ease and comfort. In this respect he was like a countryman, too. Again like a countryman, he had a heart as warns as fire radiating warmth, power and light. He was a man of few words, but of all smiles. His smile was natural and friendly. In his view, people could love each other, except those with deep prejudices and those who could not bring themselves out in the open. He hated these people, and to them he wouldn't show anything like gentleness. In this world, only those who could hate could love. Those who did not know what to love and what to hate were useless people. Hussheng thought that young people had little prejudice but lots of future promise, so he was willing to devote his life to them without reservation, letting the religion of love grow and flourish among them so that they could all go to a new world. Husheng was not fond of talking too much, instead, he put his mind on work, and work, and nothing but work--an embodiment of the Confucian spirit. Though I never had a chance to talk with him very closely, I was convinced that I understood him from the way he carried himself and conducted matters.

Few people 1 knew of were as devoted as Husheng. When he was running Lida School, all his thoughts were on the school, whatever he did. Lida was like his sweetheart, his only son. He was by nature an honest man, but for the sake of Lida, he had to go and see important people, bosses and others from whom he hoped to borrow money. To raise funds, he had to run many places, even as far as Beijing and Nanjing. Once he could have gone to study abroad, but he did not go in the end because he could not tear himself away from the school. He had sacrificed his life for Lida and Iida had become his life too. Though he was head of the school for so many years, he never tried to make his name known to the public. He had forgotten about himself altogether. Now he had worked himself to death for Lida despite his robust constitution. He had died for his ideal-a meaningful death. His ideal was merely beginning to bud. Now we should all think about one question: what must we do to keep Lida alive? If Lida is kept alive, Husheng lives on.