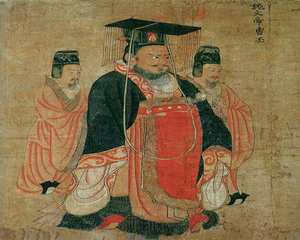 The Prince of Suiyang’s Daughter

A scholar named Tan was still unmarried at forty, which distressed him deeply. One night he was studying the Book of Songs at midnight when a girl of about sixteen came in. Her beauty and splendor had no equal on earth, and she offered to be his wife. She warned him, though: “I am no ordinary women, so for three years you must not look at me by torchlight.”

They married and had a son, and when the boy was two years old, Tan could contain his curiosity no longer. While his wife lay asleep he stealthily held a torch over her. From the waist up she was flesh like anyone else, but from the waist down she was nothing but dry bones! Just then his wife woke up.

“You have wronged me, husband!” she cried, “I was soon to have become a mortal woman. Why couldn’t you wait for one more year instead of holding that torch over me?”

“Now we must part forever,” she said in tears. “You must take good care of my son. If you are too poor to support yourself, come with me now and I shall give you a present.”

He followed her into a splendid hall—a rare building richly furnished—where she gave him a robe made of petals.

“You can live on this,” she told him.

And she tore a strip from his gown to leave there.

Later Tan sold the robe to the prince of Suiyang for ten million coins. As soon as the prince set eyes on it, he said: “that was my daughter’s robe. This fellow must be a grave-robber.”

He had Tan tried, and refused to believe him when Tan described what had happened. But upon going to inspect the grave, they found it unbroken. And when they opened it, under the coffin lid they discovered the strip of Tan’s garment. They perceived that his son resembled the princess too. So at last the prince as convinced. Summoning Tan, he returned him the robe and made him his son-in-law, while the child was recommended for a post in the palace guard.