Message on the Occasion of World Meteorological Day 2014

Recognizing the strong stake that young people have in the future, WMO has chosen “Weather and climate: engaging youth” as the theme for this year’s World Meteorological Day.

Today, people between the ages of 15 and 24 make up a sixth of the world’s population. About 85 per cent of these 1 billion young men and women live in developing countries. Compared to their peers of only 50 years ago, the young people of today are on average healthier, more educated and skilled. Technologies permeate their lives, enabling them to better interact with the world around them. Yet many young people still suffer from poverty and discrimination, inequality and exploitation; many of them still lack access to education, health and other basic services.

These problems are exacerbated by the hazards of climate change and extreme weather, which characterize the lives of young people today and will have an even greater impact in the decades to come. Atmosphere and ocean temperatures continue to increase, ice caps and glaciers around the world are steadily declining, sea level is rising and a number of extreme weather and climate events are becoming more frequent and/or more intense.

Human influence on the climate system is unequivocal. The global concentration of CO2 and other greenhouse gases in the atmosphere keeps growing unabated and is reaching unprecedented levels in human history. Maintaining our current dependence on fossil fuels will lead us to a significantly warmer planet: by the end of the century the temperature could be up to 4 degrees Celsius higher than in pre-industrial times. Limiting the warming to less than 2 degrees Celsius can still be achieved, but it will require a rapid significant reduction in greenhouse gas emissions.

Achieving this objective demands urgent, decisive and courageous action. The world’s youth can be a powerful actor of change in this regard. Climate action is not just about CO2 emissions, it is about people, about the values we share and what each of us is ready to do to promote them. Young people are a source of innovation and of fresh insights into problems and their possible solutions. They call for just, equitable solutions.

As the next generation prepares for changing weather and climate, young people can play an active role in monitoring, understanding and responding to the weather and climate of today and tomorrow. They have the capacity to promote climate awareness, mitigation and adaptation, but in order to unleash the youth’s full potential for addressing climate change, we need to be able to involve them in the formulation and implementation of the policies that affect them today and will concern them tomorrow.

Scientific understanding of how the atmosphere, ocean, land and water interact to generate weather and climate is improving, making it increasingly easier to generate seamless weather and climate forecasts. The WMO community has already developed tools for understanding and forecasting the weather and climate, and over the coming decades these tools will become more skillful, more widely shared and used. Information products and services based on climate predictions will strengthen our ability to mitigate and adapt to climate change, as well as to pursue sustainable development—making us better prepared to face coming storms, floods and heatwaves; helping farmers to better organize planting and harvesting; and increasing the safety of ship and air navigation...Young people who choose a career in meteorology, hydrology or climate science will be able to play an increasingly important role, and thus make a vital contribution to the safety and well-being of their communities and countries.

Climate change makes us more uncertain about our future and yet, despite this uncertainty, one thing is clear: our society bears a responsibility not only to itself but also to future generations. The youth of today will live through the second half of this century and, if we do not act urgently, they will witness the severe impacts of climate change foreseen by the latest assessment of the Intergovernmental Panel on Climate Change. As a result of the choices we are making in the present, young people will have a major role to play in shaping the Earth’s future. While the challenges facing the next generations are enormous, the opportunities for addressing them have never been greater. 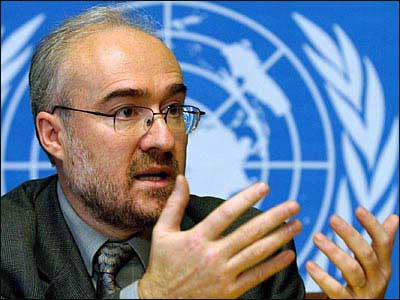