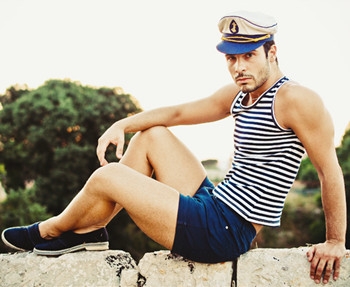 The Old Man and His Three Sons

An old man had three sons. The eldest was an extraordinary sailor—tough, brave, dutiful and adventurous. The old man loved him indeed, thinking he was the kind of son for a father to be proud of. But caught in a tempest on the sea, this tough and brave son of his was engulfed in the stormy waves.

His second son was a strong coal miner, stronger than the other miners. No hard work could ever fatigue him. Besides, he was honest and trustworthy, willing to help others. Therefore, his fellow miners, especially the young ones, sought for his friendship and took pleasure in being friends with him. His father cherished him as a godsend—a great compensation for the loss of his eldest son. But unfortunately, he also lost his life in a brave act of self-sacrifice. One day, when he was working down the pit, the props, damaged, gave way and the pit caved in. he grasped one prop that was about to fall and held fast to it. Many of the miners got out of danger, but he was crushed in the pit.

There were no words to describe how grieved the old man was. Soon he became weak and flabby. However, he had another son—the youngest one—to fall back on. This time he changed his mind. He did not encourage him to become a hero, because he could no longer stand the poignancy of losing his last child. He sighed, “I would rather he be a mediocrity than a talented person losing his life.” He set about educating him in such a way that even old women would not adopt in educating their granddaughters. And this son of his turned out to be very obedient—he didn’t let him down. In other words, he became a weak, selfish and worthless person. It was not until then that the old man found himself a sad and most unfortunate man he had never been before. He was full of remorse for the mistake he had made. He said in a tone filled with anger and pity for his son, “This is what is called good-for-nothing. He has now become the very kind of person I dislike. I am to blame though, for I’ve made him like this with my own doing. Ah, I wonder if life has any meaning to such a creature, though he is not drowned in the sea, nor buried in the pit.

The old man could not bring himself to love his son any more, for he could only love stormy seas, lofty mountains and heroic people like his first two sons. Being a father, he was now suffering from a broken heart—a punishment brought on himself for ruining his youngest son as a result of his own mistake.