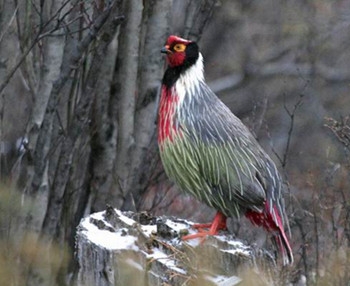 The Qinling blood pheasant, also known as the Taibai chicken, lives mostly I in the dense forests of the 3,767-meter-high Taibai Mountain—the main I peak of the Qinling Mountain Range.

The bird is a bit smaller than a chicken. The head of the male bird is covered with brown and gray feathers, which extend backwards to form a crest. Its [chest is grass-green and its tail varies from brown to crimson, grayish white, i and black. The female bird’s plumage is predominantly brown.

Qinling blood pheasants are usually found in the pine forests of the frigid alpine belt 1,800 to 3,200 meters above sea level. They move in groups of at least six or eight birds, and in winter a flock may have as many as 40 or 50 pheasants. They are not afraid of people, and sometimes they can be found strolling along forest trails. Mating season runs from late April to earlv July. The pheasants build their nests in alpine meadows or in caves, and after laying six to eight eggs, the female bird begins to brood for 29 days. The young birds live with their parents until winter, then the family makes its seasonal migration. The bird does not fly well, but it runs very fast. It sleeps in trees and feeds during summer and autumn on leaves and sedge or grass seeds, honeysuckle and azalea flowers, mushrooms, and a few insects. In winter and spring, when the alpine belt is icebound, it mostly eats moss.

The Qinling blood pheasant is listed as a rare bird under special protection. Despite its beautiful plumage, the bird has never been displayed in zoos because of its scarcity and inability to adapt to new environments.