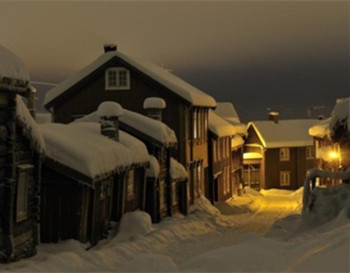 It was a cold winter night. The street was deserted. I stood alone under a tree with an entanglement of bare branches overhead, waiting for the last bus to arrive. A few paces off in the darkness there was a shadowy figure squatting against the wall, but he turned out to be a tramp. The street was lined with fine houses, their illuminated windows beaming quietly towards the dark blue sky. It was icy cold with a gust of strong wind howling around. A couple of withered leaves, still clinging to the branches, rustled mournfully from time to tithe. The shadowy figure, taking a copper coin from me with thanks, straightened up to attempt a conversation with me.

"It's really cold here," he complained. "It couldn't be colder anywhere else ....What do you think, sir?"

Seeing that he was not too nasty an old man, I readily responded: "It must be colder in the country, I'm afraid."

"No, no," he disagreed and began to cough, his words stuck up in his throat.

"Why?" I asked. "In the country when it frosts, you always find the roofs and the fields turning white in the morning, but you don't see that here on the streets."

He patted his chest to ease off his coughing and went on excitedly: "True, true... it's cold in the country, but when you get into somebody's straw stack, you are warm again at once.... But this street, humm, what a terrible place! In the mountains, it's even colder, but when they have a fire in the house with the whole family sitting around it, wow, it's heaven!"

Then he began to relate to me the adventures of his younger days-travelling alone in winter nights through the mountains in the south. As I was interested in stories about wanderers and since the bus had not arrived yet, I encouraged him to go on."When you end up in the mountains at night," he said, "and if you are a decent person, you can always turn to the place where there is a light flickering and a dog barking. You push open the bramble gate under the shade and walk in without hesitation. Part the people, men or women, around the fire with your hands and you bring yourself -- a cold and wet man with dew-among them. Immediately your nose is filled with the aroma of hot tea and roast sweet potatoes. When you look round you see friendly faces smiling at you; there is no hint of anything like blame for what elsewhere might be considered as brusqueness. Scarcely have you begun to tell them where you come from when a cup of hot and strong tea is handed over to you. Grandma will tell her granddaughter to feed the fire with more wood, saying that the guest needs more beat to warm up. When you are recovered from cold and fatigue, you tend to tease the baby, stroking his chin, giving a gentle pinch to his cheek or making a face to provoke him to gurgle. The delighted young mother will encourage her baby to share his sweet potato with you. The baby will then break it in two and thrust one half into your hand. If you intend to stay overnight, you will be entertained with all possible hospitality. If you've just dropped in to warm up and then go on your way, they will see you off at the gate, saying 'Please do drop in on us again on your way back. ' "In the middle of his babbling another gust of wind brushed by and the old man began to cough again. I was so intrigued by his story that I did not feel the cold any more. Suddenly he grabbed my hand, forgetting that we were strangers, and asked:

"Sir, could you tell me why the people here even do not allow a countryman in to warm his hands? They must've got bigger fires in their houses. Look at their bright windows. . . "

The bus came rumbling up. Withdrawing my hand from his, I answered at the top of my voice"Because they are more civilized than the mountain people. . . "

With that I jumped onto the brightly-lit bus which started moving on, leaving the old man behind. But the little houses with flickering oil lamps in the remote mountains and the intoxicating warmth and friendliness of their inhabitants left a deep impress on my memory.