The chart shows the division of household tasks by gender in Great Britain.
Write a report for a university lecture describing the information shown below.
You should write at least 150 words. 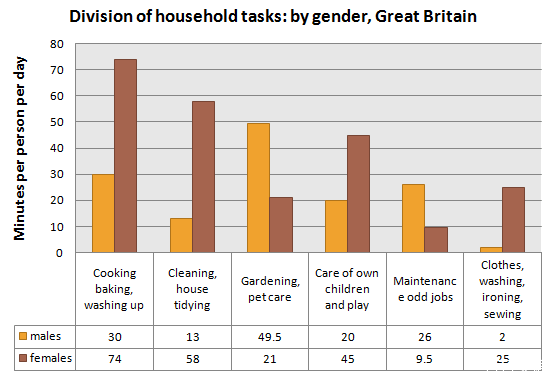 Source: Office for National Statistics on behalf of the Controller of Her Majesty's Stationery Office.

The chart shows the average number of minutes per day men and women in Great Britain spend on jobs around the house.

In total, men spend just over two-and-a-half hours on household tasks whereas women spend slightly less than four hours. Women spend more than twice as much time doing kitchen tasks such as cooking and washing up as men (74 minutes for women as opposed to 30 minutes for men. Women are also more active in cleaning the house- it takes 58 minutes of their day compared to / with 13 minutes for men - and childcare, where women put in more than twice as much time as men.

On the other hand, men are more active in gardening and pet care, where they spend twice as long as women, and maintenance and DIY, on which they spend 15 minutes more than women. Women account for almost all the time spent on washing and ironing clothes. This takes them 25 minutes, while / whereas men spend just 2 minutes on this task.

Overall the figures show that women spend more time on routine domestic chores than men, while / whereas men do more household maintenance, gardening and pet care.