The first table below shows the results of a survey which sampled a cross-section of 100,000 people asking if they traveled abroad and why they traveled for the period 1994-98. The second table shows their destinations over the same period.

Write a report for a university lecturer describing the information shown below. 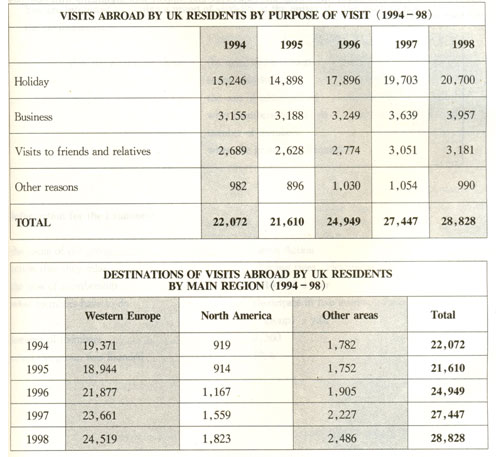 The two tables reflect the results of a survey which sampled a cross-section of 100,000 British people over a span of four years from 1994 to 1998. The first one shows the purposes of their visits abroad and the second indicates their choices of destinations.

As can be seen from table 1, holiday-making was the main reason for British people to travel abroad. Next were for business sake and for visiting friends and relatives. Table 2 shows that Western Europe was the primary destination of the British people traveling abroad and next came North America and many different countries and areas as a whole.

First, in 1994, there were 15,246 visits abroad for holiday spending which contrasted strikingly to 3,155 visits for business, 2,689 visits for visiting friends and relatives and 982 visits for other reasons. In 1995, we see that the number of visits paid by the sampled British people in the survey decreased to 14,898, but it was still much higher than visits for all other reasons. In the following years, we find that visits for holiday making, business and for visiting friends and relatives continued to rise, among which 1996 witnessed the biggest growth, increasing from 14,898 to 17,896. In 1997, visits for business and for seeing friends and relatives saw the largest growth and there were an increase by 390 and 277 respectively. Visits abroad for other reasons fluctuated, dropping from 982 in 1994 to 896 in 1995 and then climbing back to 1054 before finally falling to 990. In terms of the total of each designated year, 1998 boasted the highest with 28,828 while 1995 was the least with 21,610.

From the two tables, we can see the changes in the reasons for British people to travel abroad and their preferred destinations.