The graph blew shows the unemployment rates in the US and Japan between March 1993 and March 1999.

Write a report for a university lecturer describing the information shown blow.

According to the results of the labor-force research published recently, the following conclusions can be drawn from it. 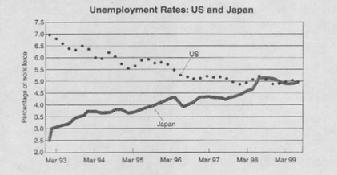 The major conclusion that I've drawn using the graph, is that number of unemployed in USA decreased by about 2.0% in the course of six years, while in Japan it actually increased by 2.5%. As a result, in March 99, both Japan and US had about 5% of their work force unemployed.