As protests erupted in Rome and other cities on Thursday, Italy's new Prime Minister, Mario Monti, made his first speech to the parliament. The Prime Minister unveiled his economic plan, vowing to spur growth. He also warned that Italy faced a serious emergency which could impact the future of the European Union.

Speaking ahead of a confidence vote to confirm parliamentary backing for his technocrat government, Italian Prime Minister Mario Monti said the three pillars of his government’s policy would be budgetary rigour, economic growth and social fairness.

The former European Commissioner told the senate that "the end of the euro would cause the disintegration of the united market." 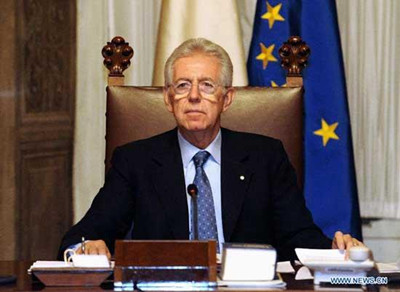 Monti said: "The future of the euro also depends on what Italy will do in the next week. Also, not only, but also, international investors have almost half of our public debt, we must convince them that we took the road that leads to a gradual but durable decrease of the ratio between public debt and gross domestic product."

He also dismissed suggestions that European leaders were imposing constraints on Italy, saying Italy was well-equipped to overcome the crisis.

But Monti suggested that much harsher medicine was needed to heal Italy’s finances and revive the stubbornly stagnant economy.

He warned Italians they must brace for more "sacrifices", including the probable return of a property tax on primary residences.

Monti said: "In view of the sacrifices that have already been requested and will be requested of Italian citizens, we must act to decrease the costs of the political institutions. All those who work in elected institutions, those who are leading figures of state-run companies, in general all those that represent political and administrative institutions at all levels will have to behave with sobriety."

He said he would quickly work on lowering Italy’s staggering public debt, which now stands at 1.9 trillion euros, about 120 percent of its GDP.

Mario Monti’s choice of unelected experts for his Cabinet and the prospect of tough reforms have fuelled unrest.

In cities throughout the nation on Thursday, students clashed with police in protests against feared budget cuts, while previously planned transport strikes halted buses and trains.