Tropical storm Fengshen continues to weaken on its way north and further inland. The storm brought heavy rains and strong winds to China's southern coast on Wednesday after tearing through the Philippines last weekend. 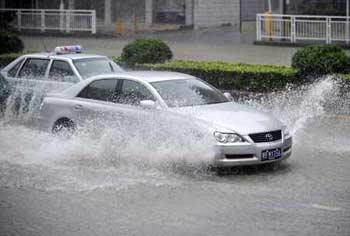 Cars drive in flooded streets in Shenzhen City, south China's
Guangdong Province, on June 25, 2008. Tropical storm Fengshen
hit the southeast coast of China early on Wednesday, bringing
about heavy rains and strong winds. The storm made the landfall
in the coastal area of Shenzhen at 5:30 a.m. with winds of up
to 83 kilometers per hour, according to the provincial
meteorological station.(Xinhua Photo)

The storm made landfall at Shenzhen in Guangdong Province, with winds of up to 83 kilometers an hour.

The storm delayed over 120 flights and cancelled another 14 in Shenzhen and Hong Kong.

Shipping from the Fuyong Dock, which links the airport to Hong Kong and Macao was also cancelled.

More than 13,000 ships in Guangdong returned to harbor before the storm hit.

Middle and primary schools in Shenzhen, Hong Kong and Macao suspended classes, and the Hong Kong markets didn't open for trade on Wednesday until 2:30 in the afternoon.

Meteorologists expect the storm continue to weaken, but still bring heavy rains to the provinces of Guangdong, Fujian, Jiangxi and Hunan as well as Guangxi Zhuang Autonomous Region.

In Hunan, Anhui and Jiangxi, some lakes and rivers have been near the overflow point since the start of the rainy season, and the fresh rainfall is adding pressure.

Those areas are on alert for possible flooding and other threats.